Will Ethiopian aliya be delayed yet again? – Israel News 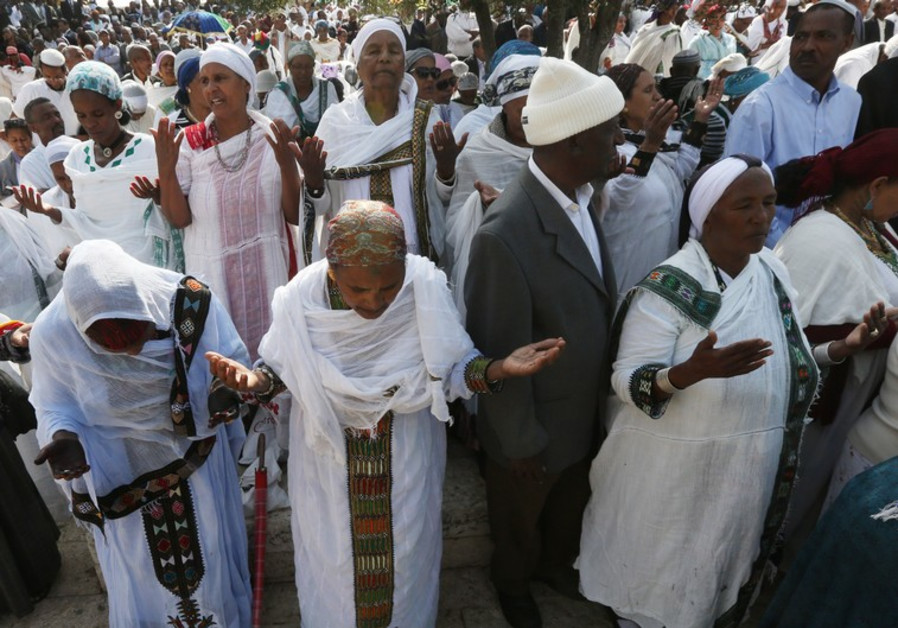 
The continued immigration of thousands of Ethiopian Jews does not appear to be on the agenda of the cabinet meeting scheduled for Thursday, in which the state budget for 2019 and reserve budget for 2018 will be decided, despite the topic having been discussed during a special hearing held by the State Control Committee.

The Jerusalem Post reported on this issue at the end of December and there had been no movement on the matter until Sunday, when apparently motivated by the scheduled committee meeting, the Prime Minister’s Office sent a letter to Interior Minister Arye Deri requesting relevant data.

Representatives of the PMO have said it can only present a new resolution on the issue after it receives that information. Once a resolution is passed, the Finance Ministry can allocate the necessary funds.

In 2017, 1,308 Ethiopians immigrated to Israel, in accordance with the latest cabinet decisions on the issue, which stated that up to 9,000 Ethiopians can be brought to Israel by the end of 2020. But a new cabinet decision is needed to allow for continued aliya from Ethiopia this year. If the relevant steps aren’t taken by the PMO, Interior Ministry and Finance Ministry in the coming days, the costs to cover their immigration in 2018 won’t be included in the budget.

“In the history of the State of Israel, there has never been a budgetary limit on aliya,” said committee chairwoman Shelly Yacimovich of the Zionist Union. Yacimovich charged that Ethiopian Jews are being approved for immigration bit by bit because of racism, with families being split for years as individual family members only receive approval.

“If the immigrants who waited in Gondar and Addis Ababa were blond, they would be accepted with open arms, as is the case with tens of thousands of white immigrants every year,” she said.

FALASH MURA is the name given to those members of the Beta Israel community in Ethiopia and Eritrea who – under compulsion and pressure from missionaries – converted to Christianity during the 19th and 20th centuries. Since their ancestors converted to another religion, they are not covered by the Law of Return, which grants the right to immigrate to Israel and gain citizenship to anyone with a Jewish grandparent.

One Ethiopian attendee at the meeting, Fikre Fentahon, spoke emotively of her father, who was left behind in Ethiopia. Fentahon, 23, hadn’t seen her father in 17 years, since she made aliya, but flew to see him last year.

“I finally understood what a father’s embrace is,” she said as she held back tears. “Most importantly, I knew I wasn’t alone.” Fentahon’s mother died years ago.

Fentahon said the family had not received any clear answers from the relevant authorities as to whether her father is eligible to make aliya.

Referring to suggestions she has heard that he should come to visit for a few months, she said: “I want to remind you that my father is Jewish. He’s not a tourist, he deserves to live here and my grandmother deserves to see him after so many years. And me, I grew up without my parents. I can’t understand why I have to grow up without my father. I have paid my dues as a citizen,” she added, referring to her IDF service as an intelligence officer. “Why is the state preventing me from living with my father?” she asked.

Zionist Union MK Revital Swid responded, “We can’t tell you or your friends, ‘You are good to be soldiers, MKs etc., but your relatives aren’t good enough to come to Israel.’” MK Avraham Neguise of Likud, who has spearheaded the struggle for continued Ethiopian immigration, stressed that Fentahon’s story is far from rare. “Eighty percent of those who are waiting have first-degree family living here,” he said.

The committee called upon Prime Minister Benjamin Netanyahu, Deri and Finance Minister Moshe Kahlon to ensure that continued Ethiopian immigration is included in discussions at the budget meeting on Thursday. It also instructed the state comptroller to prepare a follow-up report on the serious failures of recent years in bringing the remaining Ethiopian Jews to Israel.

Yacimovich announced that she intends to discuss the subject at a meeting scheduled for Monday, February 12.