Images of two men police believe carried out deadly bombings in Uganda a week ago have been released.

Police found two unidentified heads in the wake of the Kampala bombings that killed at least 73 people, and believe the pair were suicide attackers.

At least 73 people died at a rugby club and a restaurant during the World Cup final. Somali Islamist group al-Shabab has said it was behind the blasts.

Ugandan troops are part of an African Union force supporting a fragile interim government in Somalia. 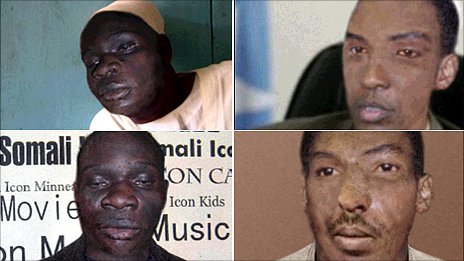 Two bodies which seemed to have borne the brunt of the blasts remained unclaimed and unidentified, police in Kampala said, leading them to conclude suicide bombers were responsible.

“These attacks were carried out by suicide bombers. The evidence is overwhelming,” police chief Kale Kayihura told a news conference in the Ugandan capital.

“Two heads have not been claimed, neither have they been identified. It can’t be a coincidence.”

Mr Kayihura also said facial reconstruction of the suspected bombers suggested that one was of Somali origin and the other a black African of undetermined origin.

Most of the victims were Ugandans, Ethiopians and Eritreans

At the request of the Ugandan police, Interpol published photos on Sunday of the possible appearance of the suspected suicide bombers, based on their facial reconstructions.

“By making these photos public, we believe someone, somewhere could recognise one or both of these men,” Mr Kayihura said.

Ugandan authorities have arrested more than 20 people as they investigate the attacks.

At least 60 of those killed were Ugandan nationals. The other victims included Ethiopian, Eritrean, Indian and Congolese nationals as well as an Irish and a US citizen.

Dozens of other people are still being treated in hospital for their injuries.

People attend a memorial service for six Eritreans killed in a twin bomb attack in the capital Kampala on June 11, 2010,