Three Kenyans have been charged with the murders of 76 people killed when bombs exploded as they watched the World Cup on TV in Kampala, Uganda.

They have yet to enter pleas and will remain in custody until their next court appearance on 27 August.

Al-Shabab, a Somali Islamist group, said it carried out the attacks.

Ugandan peacekeepers are in Somalia, helping the weak, UN-backed government against al-Shabab, which has links to al-Qaeda. The three men did not speak during their court appearance

The African Union this week pledged to boost its peacekeeping force in Somalia by 4,000 troops, after a summit meeting in Kampala, which was overshadowed by the attack.

Only Uganda and Burundi have so far sent troops to the Somali capital, Mogadishu and al-Shabab had threatened to attack both countries.

The explosions on 11 July, which also injured about 70 people, ripped through a rugby club and an Ethiopian restaurant as football fans watched the last few minutes of the World Cup final.

The three men, all residents of Kenya, appeared on Friday in a Kampala magistrates court.

The charge sheet identified Hussein Hassan Agad as “a preacher of Islam”, while Idris Magondu was identified as an employee of a trading company in Nairobi, Kenya. 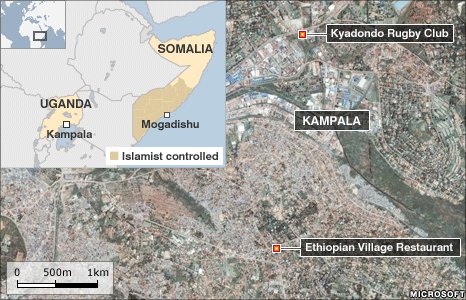 The charges also include three counts of terrorism and 10 counts of attempted murder.

The men did not speak during their court appearance.

Chief Magistrate Deo Sejjemba said the accused were not allowed to enter a plea because the court does not have jurisdiction over the crime of terrorism.

The three will reappear at the magistrates court on 27 August, but will not be permitted to plead to the charges until Uganda’s Directorate of Public Prosecutions decides the case is ready to move to the High Court.

The three men were remanded in custody.

The BBC’s Ignatius Bahizi, who was in court, says the men were arrested on 12 July, the day after the bombings.

There was no indication of how long they had been in Uganda prior to the attacks, he added.

He says at least 27 people have been arrested by an international team of investigators, including the FBI.

Police said they will bring more suspects to court in the coming days.