Thousands of Ethiopians Immigrating to Israel

* Ethiopians emigrate as major drought hits Horn of Africa
* Some 120,000 Ethiopians live in Israel
Jerusalem, – Hundreds of Ethiopians are migrating to Israel this summer, as part of a plan to bring up to 8,000 people to the Jewish state.

The mass emigration comes as Ethiopia and the broader the Horn of Africa suffer their worst drought in 60 years.

Israel is absorbing the Ethiopians at a rate of 200-250 each month.

At the end of last year the Israeli government approved the immigration of 8,000 Ethiopians claiming to be of Jewish descent. 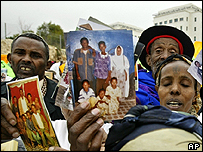 The Falash Mura’s ancestors converted to Christianity under domestic pressure in Ethiopia in the 19th Century, complicating their status as Jews and their rights under the law of return.

Under Israel’s Right of Return law, Jews from anywhere in the world have a right to move to and live in Israel.

Israel’s cabinet approved their immigration en masse last year partially because of their Jewish roots and partially to resolve a humanitarian crisis.

Many members of the Falash Mura live in poor conditions in transit camps in northern Ethiopia.

Israel’s Prime Minister Benjamin Netanyahu said Israelis had a moral duty to resolve the complex humanitarian crisis, according to a BBC article.

“The government of Israel wants to solve this problem, because there is a difficult humanitarian crisis there,” Netanyhau told the ministers.

“These are the seeds of Israel – men, women and children – that currently find themselves in the worst living conditions,” he added.

Thousands of Ethiopian Jews who kept their Jewish faith throughout the centuries were flown to Israel in the 1980s and early 1990s.

An estimated 120,000 Jews from Ethiopia live in Israel.