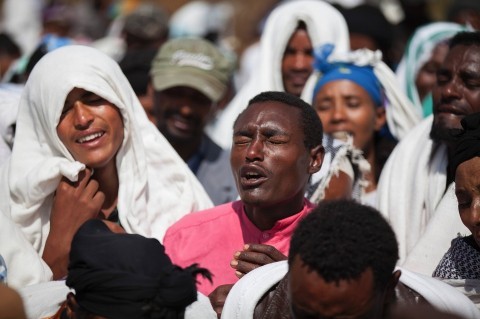 People mourn the death of Dinka Chala who was shot dead by Ethiopian forces in the Oromia region, in December 2015. Dinka Chala was accused of protesting, but his family says he was not involved. (Zacharias Abubeker/AFP/Getty Images)

Last weekend thousands of people protested in Gondar, a major city in northern Ethiopia. The protest follows anti-government demonstrations in July that ended in violence in which at least 10 people died.

Protests in Ethiopia’s south-central Oromia region have been ongoing since November 2015. A recent report by Human Rights Watch details excessive and lethal force by state security forces in response to the Oromo protests, estimating that more than 400 people have been killed and thousands more injured and arrested.

The lack of media freedom in Ethiopia makes it difficult to get a handle on what is happening. Although social media outlets like Facebook and Twitter offer insights from citizen journalists, the Ethiopian government recently cracked down on social media, limiting it as a forum that informed the broader global community.

[Ethiopia shuts down social media to keep from ‘distracting’ students]

Can a work of historical fiction shed some light on the current events in Ethiopia?

In this week’s installment of the African Politics Summer Reading Spectacular, we feature a novel for the first time. Why fiction when there’s plenty of informative — even riveting — non-fictional accounts of African politics? We took a cue from fellow Monkey Cage blogger Marc Lynch, whose annual “summer beach reads” list on Middle East politics had three (!!!) novels this year.

[What to read this summer about the Middle East]

Historical fiction can be instrumental in reimagining fractured histories. In their exploration of history and culture, works like Chinua Achebe’s “Things Fall Apart” and Chimamanda Ngozi Adichie’s “Half of a Yellow Sun” blur the lines of what is “true” and “factual.” Even as fictive accounts, these works act as historical and anthropological references.

Our feature for this week, Gabriella Ghermandi’s “Queen of Flowers and Pearls,” continues this tradition. Ghermandi brings to print a novel that weaves individual memories of the Italian occupation of Ethiopia into collective history. (The novel was originally published in Italian in 2007. An English translation by Giovanna Bellesia and Victoria Offredi Poletto was published in 2015.) The novel’s protagonist is Mahlet, a young Ethiopian girl “so curious that she becomes patient,” who listens to the stories of the adults around her. Her great uncle Yacob’s account of his days as a resistance fighter during the Italian occupation in the 1930s kicks off an exercise in memory and remembrance. She makes him a promise to tell Ethiopians’ stories of the occupation; a promise she must remember through the upheavals of adolescence and adulthood.

Ghermandi weaves personal memory into collective history. Although centered on the Second Italo-Ethiopian War, the stories Mahlet collects and her own coming-of-age narrative detail day-to-day life in Ethiopia across three generations. In Ghermandi’s novel, the three-cup ritual of coffee drinking persists alongside power struggles between the Derg and the resistance fighters.

Historical fiction may reveal little of a country’s current political state. Nonetheless, “Queen of Flowers and Pearls” offers a guiding perspective to help us form questions and seek answers from the present as well as the past. Perhaps most hopefully, it makes us consider the current repression in light of the past victories of the Ethiopian citizenry.

Sarah Agatoni is a student at Smith College (Class of 2017) majoring in economics and mathematics.

Deaths and detentions in Ethiopia as protests flare

Deaths and detentions in Ethiopia as protests flare – Aljazeera