The idea that human ancestors were using stone tools about 3.4 million years ago has been challenged by a Spanish-led team of researchers.

The original claim was based on what were purported to be butchery marks on animal bones found in Ethiopia.

It pushed back the earliest known tool-use and meat-eating in our ancestors by some 800,000 years.

But Manuel Dominguez-Rodrigo and his team tell PNAS journal that the marks are more likely to be animal scratches.

Scroll down to watch the Video of the Tools

“A mark made with a stone tool could be morphologically similar to a mark that is accidentally made by an animal trampling on a bone, if the bone is lying on an abrasive [surface],” said Dr Dominguez-Rodrigo from the Complutense University of Madrid. Tool or animal damage? The original team has defended its position

“We can match mark-by-mark every single mark on the fossils with marks that we obtain using trampling criteria,” he told BBC News.

The group behind the original claim has robustly defended its position.

“Needless to say we don’t agree with their interpretation,” said Shannon McPherron from the Max Planck Institute for Evolutionary Anthropology, Leipzig, Germany.

“But this is science; debate is good – we welcome it.”

The earliest indisputable evidence for early-human tool use comes from two locations in Ethiopia separated by about 100km, in the nearby Gona and Bouri areas of the country. These date to about 2.6 million years ago.

It comprised the rib of a cow-sized animal and the thigh bone of a goat-sized antelope discovered in the Dikika region.

The specimens were said to have the sort of damage stone tools would produce if ancestral humans had tried cleave the meat from the bones and get inside them to extract the marrow.

The fossils were dated to about 3.4 million years ago, putting them in the time frame of the famous hominin Australopithecus afarensis, better known as “Lucy”.

But Dr Dominguez-Rodrigo’s team is now contesting this view.

The researchers compared the other group’s findings with previous studies that have detailed the natural processes – such as animals stepping on objects – capable of leaving marks on fossil surfaces.

According to the Spanish team, most of the purported tool marks on the Dikika bones can be put down to trampling and geological abrasion.

The evidence from the two bones is not sufficient to overturn the consensus timeline of human behavioural evolution, the scientists say. 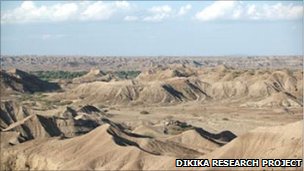 The Dikika region of Ethiopia: The hunt goes on for the origin of humans

“This might seem like an obscure debate but if [McPherron and colleagues] are correct, the implications are huge,” argued Dr Dominguez-Rodrigo.

“In the future, we may find traces of hominins eating meat and using stone tools long before we already know. But if they are right that means these features appear long before creatures had the brain to actually do this, from the interpretation we have from the last 40 years. So it’s a big statement that has to have a special kind of evidence.”

At the time of its publication in the journal Nature, the McPherron team tried to head off criticism that the marks were inflicted by animals. In its view, the stone-tool origin of the damage was “unambiguous”.

Dr McPherron said he was disappointed that the Spanish team had not examined the bones directly – only pictures of them.

“There are quite a few marks on these bones and on a few of them they think that the pattern that you see falls within the range you see for trampling,” he said.

“But the point is to explain the totality of the marks on these bones, and the totality fits very well within the pattern for cut-marked, or stone-tool-modified, bones,” he told BBC News.