The sun hadn’t yet risen Wednesday when Yodit Derese’s life began to change.

The 25-year-old Ethiopian woman’s eyes flicked back and forth nervously as one doctor after another hovered over her, checking her vital signs and asking about her health history.

Derese, dressed in a lavender hospital gown, said through an interpreter that she never thought this day would arrive.

Her feelings, she said, alternated between anxiety and excitement — excitement for a new life, one free of a

malformed foot. Soon, she would be able to run, to dance, to walk long distances. At her bedside stood Hilary and Eric Shreves, the North Portland couple who helped make surgery possible.

Finally, after two hours of examinations and waiting, Derese was ready. She gripped and kissed her prayer book as she was wheeled into the hallway and through the doors of an operating room at St. Vincent Medical Center. 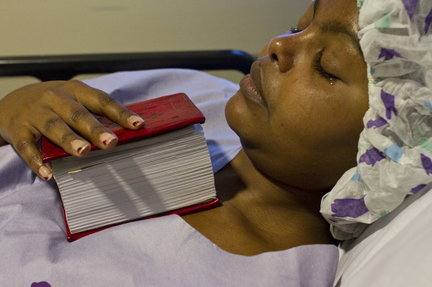 Yodit Derese clutches her Ethiopian prayer book as she's wheeled to an operating room for surgery on her right foot. A Portland couple, Eric and Hilary Shreves, worked years with support from others to bring Derese to the U.S. to repair a clubfoot.

“There she goes,” said Hilary. “I just really can’t believe this day happened.”
—
Nearly every step in Derese’s life has caused her pain. But it’s hard to tell. She takes care to hide her condition and has only a slight limp.
“I’m trying my best,” she said at a doctor’s appointment several weeks ago.

“She’s good at that,” Hilary said.

Each year, an estimated 200,000 children worldwide are diagnosed with clubfoot, according to CURE International, a nonprofit in Pennsylvania that establishes hospitals for children with crippling disabilities.

The congenital condition causes one or both feet to twist out of place. While most U.S. cases are treated in infancy, children born in developing countries often don’t have access to surgery, CURE spokesman Noel Lloyd said.

Derese was lucky, receiving four surgeries as a child in Ethiopia. But over time, her right foot grew the wrong way. Now it’s what Hans Moller, her orthopedic surgeon in Portland, calls an overcorrected clubfoot. Only the heel and outside edge of her right foot touch the ground.

“Eventually, it will break down and lead to, at best, amputation,” Moller said.

Back home in the Ethiopian capital, Addis Ababa, Derese endures a condition that is more than a disability. She couldn’t work; she once held a job breaking rocks into gravel, earning the equivalent of $16 a month, but the pain in her foot was too much to bear. Marriage was out of the question. Because walking was her only option for getting around, she often spent her days sitting.

Hilary and Eric Shreves, (left) join family friend and University of Portland nursing student Sarah Caneff in a moment of prayer over Yodit Derese prior to her much anticipated orthopedic surgery at Providence St. Vincent Medical Center. Faith Cathcart/The Oregonian

Life hasn’t been easy in other ways. She lost both parents as a child and was left to care for a younger sister, Naomi, until poverty forced Derese to take her to an orphanage.

Then a door opened. The Shreveses adopted Naomi and set in motion a plan to transform Derese’s life, too.
—
Eric Shreves will never forget the day he met Derese in 2005. She invited him to her mud hut for coffee just before he was to return to the U.S. with Naomi.

“I was really surprised at the bond I shared with her right away,” Eric said. “I was struck by how graceful and humble she is.”

Eric and Hilary had learned about Derese just a few weeks before. Hilary’s parents tried to adopt Derese, but at 19, she was too old. Still, the family vowed to help her.

“There was definitely a sense of urgency,” Eric said. “She’s part of the family; we couldn’t just leave her in Ethiopia.”

READ THE WHOLE STORY from: Origonlive.com