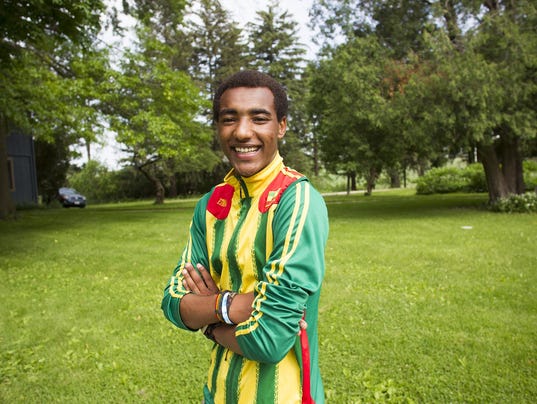 Wubetu Shimalesh poses for a photo at Scattergood in West Branch on June 5, 2015. Shimalesh will spend the summer in Ethiopia this year and hopes to teach others some of what he learned, and encourage others to travel and study in the United States.(Photo: David Scrivner / Iowa City Press-Citizen)Buy Photo

Six years ago, Wubetu Shimelash accepted a business card and money to buy a coat from Blake Mycoskie.

Shimelash, 20, who was living, working and attending school in northern Ethiopia in 2009, said he eagerly used the money to buy a coat and bought a pair of shoes and a book by an Ethiopian author with the leftover cash.

Initially, he dismissed the business card from Mycoskie, founder of Toms Shoes, and buried it in his pocket.

However, he said he eventually asked a friend about the email address on the card — a decision that would send him down a path to Scattergood Friends School in West Branch, where he will be a senior next year.

During the past two years he’s spent at Scattergood, Shimelash said he’s kept the book he bought within sight in his dorm room. He said seeing it reminds him of his past and experiences in Ethiopia.

“It has the story of my life,” Shimelash said.

Shimelash was born in the village of Argin, Ethiopia, near Simien Mountains National Park, a rocky area with forests and cliffs.

As one of nine siblings, Shimelash said he liked to keep busy as a child by playing and training to take on family responsibilities, including the care of his family’s sheep, cattle and other farm animals. Shimelash said that when he was younger than 10, he began traveling with these animals so they could graze, and that he would sleep in a cave while he was away from home.

“It’s kind of a tough life, but you still are happy,” he said. 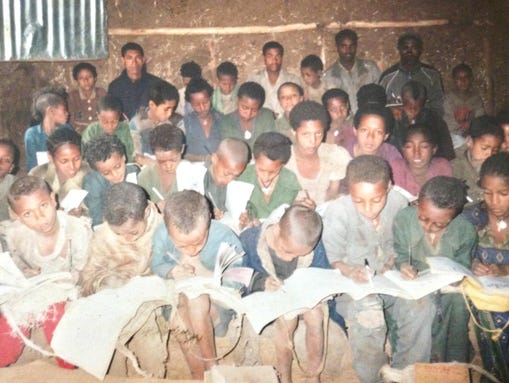 Wubetu Shimelash sits in the front row, third from the right, among his classmates at the first school he attended in the Simien Mountains National Park region in northern Ethiopia. (Photo: Special to the Press-Citizen)

At 10 or 11, Shimelash said his father got a job in Simien Mountains National Park, but the wage wasn’t high enough to cover the family’s expenses.

While his father sought other work, Shimelash would fill in for his father at the park. He said the job entailed helping tourists unload luggage at the park’s hotel, fetching items such as firewood for tourists or preparing horses to carry tourists’ bags while they climbed. If horses weren’t available, he said he would sometimes carry the bags himself.

In addition to this job, Shimelash said he worked as an unofficial tour guide around the Simien Mountains, hoping to receive tips — although some people tipped with candy instead of cash — and would make hats out of sheep wool to sell.

An unidentified man sits in front of the first school Wubetu Shimelash attended in a region near Simien Mountains National Park in northern Ethiopia. (Photo: Special to the Press-Citizen)

He said he recalls waking early and running to school — an experience that developed his athleticism in volleyball, soccer and other sports — while trying to balance his responsibilities at the park. He said he also had to make time for detours to his grandma’s house for his one meal of the day. At night, he said he’d study at the hotel with a candle in his hand and with his feet in a bucket of cold water to keep him awake.

While playing soccer with his classmates during a break at school, Shimelash said he met Mycoskie, who was traveling in Ethiopia.

As the founder of Toms, a company that donates a pair of shoes for every pair someone buys, Mycoskie said he’s seen thousands of kids in many countries, but he seldom gives out his contact information.

“I just was so drawn to him and so amazed at his drive and his passion,” Mycoskie said. 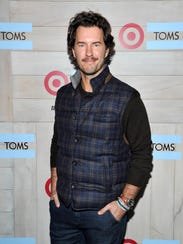 Mycoskie told Shimelash he’d be happy to help him by funding his education.

Weeks later, when Shimelash’s friend encouraged him to email Mycoskie, Shimelash said he was bewildered at the idea of sending an email. He said he had little experience with technology and needed an explanation of computers and email.

“I thought he was just playing tricks with me,” Shimelash said.

Despite his doubts, Shimelash walked to the only Internet cafe in the area, but was met with a power outage when he arrived. When he returned, he sent a simple message to Mycoskie that said his parents gave him their blessing to attend school, and that he hoped Mycoskie would remember him.

Mycoskie did, and their interactions led to a series of big changes for Shimelash.

With Mycoskie’s help, Shimelash traveled to the School of Tomorrow in Addis Ababa, the capitol of Ethiopia, about 500 miles south of the Simien Mountains. He said he was scared to move, initially, because of a legend in his community that suggested cannibals lived to the south. He said his mother also resisted his decision to leave, which made the move harder still.

However, Shimelash said he couldn’t let the opportunity pass. So, he traveled with his father to the capital and parted ways with his parents.

During his two years at School of Tomorrow, Shimelash said he stayed with a man named Surafel St. George, who became a great friend and mentor.

“I see him as a father figure,” Shimelash said.

Wubetu Shimalesh flips through photos from his home country of Ethiopia at Scattergood in West Branch on June 5, 2015. Shimalesh will spend the summer in Ethiopia this year and hopes to teach others some of what he learned, and encourage others to travel and study in the United States. (Photo: David Scrivner / Iowa City Press-Citizen)

He recalls a day when he tried using St. George’s remote control and was baffled to see the TV channel change. Fearing he’d broken the TV, he confessed to St. George. He said he fondly remembers how St. George laughed and amazed him by changing the channel back.

At the School of Tomorrow, Shimelash said he encountered bullying, initially, because he was from a rural part of the country. However, he said he gradually came into the fold by excelling in academics and by tutoring other students.

“My knowledge was improving and I was getting good grades,” he said.

After spending a year at another school in Addis Ababa, Shimelash learned about Scattergood Friends School, a Quaker school in West Branch, from St. George’s wife, who had lived in Illinois. He said the possibility of attending Scattergood was an opportunity he couldn’t pass up.

After facing a delay while seeking his visa, Shimelash journeyed from Addis Ababa to West Branch late in the fall of 2013.

Shimelash said that before arriving, he had envisioned West Branch being a bustling city like New York City. When he arrived, he was surprised to find a country landscape and farmland surrounding Scattergood, where staff use farming in their lessons. He said it seemed just like home, with the exception of surrounding highways.

Shimelash said he fell in love with Scattergood.

“I think I make a really good decision on that,” he said.

He said that along with its academics and opportunities to travel, Scattergood has helped him learn life skills, such as cooking, and taught him the importance of taking learning to heart rather than simply memorizing facts. He said he developed a habit of writing in his journal nightly about experiences he’s grateful for and ways he wants to improve.

Lilienfeld, born in Bolivia, said he and Shimelash have learned from one another during the past two years, and that Shimelash helped him understand the importance of focusing on goals and achieving them.

“At the beginning, I was really impressed by this guy for his desire to do the best at what he was doing,” Lilienfeld said.

Louis Herbst, academic dean at Scattergood, said Shimelash has shown amazing perseverance by coming to school in the U.S. with only basic English and facing a big culture shift. He said Shimelash’s curiosity has wowed him — for example, Shimelash participated in a computer programming activity when, just a few years earlier, email had confused him.

“He believes that he is capable of doing anything,” Herbst said.

Shimelash returned to Ethiopia last summer, where he taught students English and tried to help schools improve. He recently left West Branch to embark on similar endeavors this summer.

Shimelash said in part because of Mycoskie’s influence, he approaches his volunteer work in Ethiopia with an entrepreneurial mindset, asking schools’ leaders about problems they need help solving and tackling those problems. He said he’s noticed his work encourages communities to take ownership of their schools.

“Me working there encourages the other students to participate,” he said.

Mycoskie, who is funding Shimelash’s tuition at Scattergood, said he’s remained close to Shimelash in the past six years and has watched him learn the importance of helping others. He said Shimelash has developed “deep, deep passion” and an interest in the world around him.

“We fully support him as if he’s our own child,” Mycoskie said. 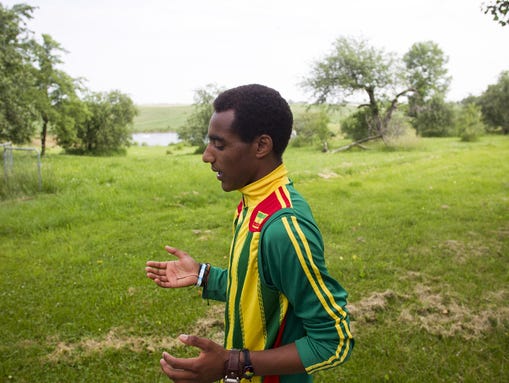 Wubetu Shimalesh reflects on his time at Scattergood in West Branch on June 5, 2015. Shimalesh will spend the summer in Ethiopia this year and hopes to teach others some of what he learned, and encourage others to travel and study in the United States. (Photo: David Scrivner / Iowa City Press-Citizen)

Shimelash said Mycoskie inspired him to seek a college education in business, and that he wants to start a business similar to Toms so he can give back to the community. He said he’d like to attend Harvard or the University of California, Los Angeles, if he can obtain visas to stay in the U.S.

Throughout Shimelash’s interview with the Press-Citizen, he returned again and again to themes of happiness and learning through experience. He said he learned survival while tending to his family’s farm animals and expanded his mind by teaching others at the School of Tomorrow and through the teachings of Mycoskie and Scattergood.

Shimelash said one thing that hasn’t changed throughout his journey is his joy — a feeling he traces back to nights he spent in the cave in Ethiopia. He said he was happy then, and that there’s no reason to let go of that happiness.

“I always have my smile in the morning,” he said.