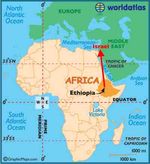 In a semi-secret mission in 1972 hastily organized and carried out in only days, the Israel Air Force rescued 12 precious lives from Ethiopia. But this isn’t a rescue like you’ve ever heard of, and the lives Israel ‘rescued’ are not even Jewish.

In a semi-secret mission in 1972 hastily organized and carried out in only days, the Israel Air Force rescued 12 precious lives from Ethiopia.

But these weren’t Jews Israel rescued – it wouldn’t mount a rescue of Ethiopian Jews until 1984, and it did so then only because the US essentially pressured Israel into joining it in a rescue.

Outside of Menachem Begin, who wanted to rescue Ethiopian Jews in the late 1970s but was thwarted by intentional leaks from the likes of Moshe Dayan, no Israeli prime minister cared a whit about saving Ethiopia’s Jews and several did everything in their power to prevent such a rescue.

You can read about the rescue of the wild asses on the Venture Africa website. There are some relatively minor mistakes in the article’s recounting of Operation Moses.

For example, the 4,000 Ethiopian Jews who died in the rescue mostly died soon after Israel intentionally leaked the rescue, not over the ensuing years. That leak killed the operation. Stranded in horrible refugee camps in the Sudan, about 3,000 or so Ethiopian Jews tried to walk back to Ethiopia. Most died on the way. The rest of the dead died earlier as they walked over mountains and desert from Ethiopia to those refugee camps where, Mossad agents told them, Israel would rescue them, or died in the camps waiting for rescue. Many of those who died in those camps were young children.

In order not to reveal themselves as Jews in an openly hostile environment, many of those Jews who died in the refugee camps were buried directly under the mud floors of the huts the refugees lived in, meaning mothers often slept on their dead babies graves.

Here’s a small snippet of the Venture Africa article:

…The campaign to bring Ethiopian donkeys to Israel would have remained unknown to most Israelis – except to the scientific community and a few die-hard animal conservationists – were it not for IAEJ executive director Zeva Mekonen-Degu’s public comments [in an radio interview in Israel].

That the government agreed to airlift Ethiopian donkeys toIsrael over a decade before it was willing to airlift EthiopianJews is proof of state-sponsored racism, Mekonen-Degualleged on air. “How are you supposed to react?” she blaredout to the show’s host Keren Neubach. “To land a plane insome hole in Ethiopia, and to load it with donkeys, and tobring them here so animals of the Bible will live in Israel,while there are Jews there knocking at the door and saying,‘We want to come! Our dream is to be in Israel, not in Ethiopia!’”…