Nigeria’s president has suspended his nation’s football team from international competition for two years after a poor showing at the World Cup.

The Nigerian Football Federation is to be dissolved and an interim board appointed, the BBC understands.

Nigeria were knocked out in the group stages without winning a game.

Niboro said: “President Goodluck Jonathan has directed that Nigeria withdraws from international competition for two years to enable the country to put its house in order. 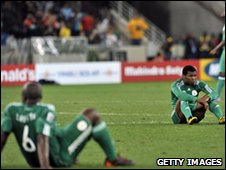 Nigerian team after the draw with North Korea

The president also plans an audit of the country’s World Cup organising committee.

“If any financial misappropriation is discovered, all officials responsible will be held accountable,” Niboro added.

The NFF released a statement apologising to “all football-loving Nigerians” for the country’s early exit from South Africa.

“No previous board has qualified Nigeria for all major tournaments internationally,” the statement read, adding that officials wanted Swedish coach Lars Lagerbeck to remain at the helm.

“We went to the World Cup and found all sorts of problems and we felt we should sit back and look inward,” Amaechi told reporters.

“At the time of writing, we have no official information on this matter,” a Fifa statement read.

Nigeria’s risks their national and club teams, plus referees, being banned from all international competitions – and their officials would not be allowed to attend meetings or events.

Nigeria were set to begin their bid to qualify for the 2012 African Nations Cup finals in September against Madagascar.

ABUJA, NIGERIA — The president of Nigeria has suspended the national soccer team from international competition for two years after its poor showing at the World Cup.

The announcement by President Goodluck Jonathan’s spokesman Wednesday also follows corruption allegations which surrounded the team in the run-up to the tournament. Spokesman Ima Niboro said all funds directed toward the Nigeria Football Federation would be examined and “all those found wanting will be sanctioned.”

Niboro gave no other specifics about the investigation, other than saying Jonathan’s decision came after reading a report submitted by the presidential soccer task force.

Federation spokesman Ademola Olajire told The Associated Press that he had no information about the suspension.

“We have not been directed,” Olajire said. “We have no letter” from the president.

The Nigerian Football Federation’s executive committee had earlier offered an apology to the government and “all football loving Nigerians” for the early exit.

Nigeria got eliminated from the World Cup after the group stage, having earned just one point — in a 2-2 draw with South Korea in its last game. Nigeria lost to Argentina 1-0 in its Group B opener and fell to Greece 2-1 in a game turned by the first-half expulsion of midfielder Sani Kaita.

The team, nicknamed the Super Eagles by loyal supporters and the Super Chickens by critics, faced almost countrywide derision after finishing third in the African Cup of Nations earlier in the year.

Nigeria fired coach Shaibu Amodu in February and later hired Swedish coach Lars Lagerback to take charge, but with only about four months before the World Cup.

Local newspapers questioned Lagerback’s selection and made allegations about endemic bribery in the program. The football federation also had to pay a reported $125,000 contract to cancel its reservations at the Hampshire Hotel north of Durban in South Africa. Nigerian officials apparently complained the three-star hotel was noisy, mosquito-infested and unsafe.

Analysts and watchdog groups say Nigeria, an oil-rich country of 150 million people, has one of the world’s most corrupt governments.

The Super Eagles haven’t won a World Cup match since 1998. The Nigerians went out with two losses and a draw in 2002 and did not qualify for the 2006 World Cup.

Nigeria now risks being banned by FIFA from all international soccer because of the political interference.

“At the time of writing, we have no official information on this matter,” FIFA said in a statement. “However, in general, FIFA’s position regarding political interference in football is well known.”

Nigeria’s next scheduled international match is a qualifier for the 2012 African Cup of Nations, at home against Madagascar in early September.

National and club teams, plus referees, would be barred from participating in international matches and soccer officials prevented from attending meetings.

“Definitely I can tell you that political interference will be dealt with by FIFA notwithstanding what kind of interference and what is the size of the country,” Blatter said Tuesday while discussing France.