Mulatu Astatke, the godfather of Ethiopian jazz music, is often flying around the world performing sell-out shows so I was lucky to find him at his home in Addis Ababa surrounded by art, conjuring up magic on his vibraphone – which looks like a giant xylophone.

He described the recipe for Ethio-jazz which he first cooked up 42 years ago while studying music in the United States.

“Most of our Ethiopian music is based on five notes [pentatonic]. What I did was fuse the five tones with 12 tones. For many years I’ve been experimenting and the more I do that the more complex it gets,” Mr Mulatu told the BBC.

“I remember one teacher at Berklee College in Boston telling us to always be ourselves and that was always on my mind. I used to do a lot of analyzing of the music of Duke Ellington, Count Basie, Miles Davis and John Coltrane and I saw how great they were and what they had contributed to the world of music.

“So my aim was always to be like them and create something to give to my country and give to the world.” Instead of simply copying the jazz greats, Mr Mulatu set about researching the music of Ethiopia and constantly added a generous pinch of this to his musical cooking pot.

“There are tribes in the south called the Derashe. They are surrounded by people who play five tone music but they have created a diminished 12-tone scale,” Mr Mulatu said.

“Diminished scales are very important in jazz music especially for improvising. We learn how Charlie Parker came up with diminished scales as well as [the French classical composer] Claude Debussy and Bach. But always on my mind is the question of who were first with the scale, these people or the Derashe tribe?”

Ethio-jazz is on a roll in Addis Ababa.

A new jazz club opened last week, new Ethio-jazz bands are forming and now there are several music colleges. It is also on the rise on the world stage.

Mr Mulatu is due to play at the UK’s famous Glastonbury festival next week.

At Mekane Yesus Jazz Music School in Addis Ababa, students study Mr Mulatu’s music and are even examined on it as part of the curriculum. 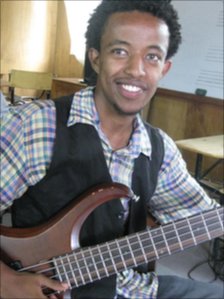 Young musicians like Robera Mekonnen look up to Mulatu Astatke

In a corridor of tiny practice rooms there were saxophonists, pianists, guitar players and some students with Ethiopian traditional instruments getting ready for the exams.

Two floors up the fire escape and the Blue Note band was cooking up a storm.

The seven-piece band was playing original Ethio-jazz songs – the unmistakable five tone scales, keeping a heavy hint of Ethiopia in the music.

“As a musician, I love all types of music but I love Ethio-jazz music most because it describes me very well – better than other jazz music,” said the band’s 20-year-old bassist, Robera Mekonnen.

“I’m influenced by the legendary musicians of Ethiopia who have brought about a change by mixing jazz with Ethiopian music. One of them is Mulatu Astatke, a man who is special because he loves his native music and has developed it scientifically.”

Over the years, Mr Mulatu has brought musicians from across Ethiopia into the studio.

For one session, Derashe musicians turned up with their six-inch long bamboo flutes, others carried giant vuvuzela-style pipes up to four metres long. When mixed with his own band, the result was an extraordinary hypnotic sound.

Among the stalls of the bustling Addis Merkato market, I found other Ethiopian instruments which Mr Mulatu has fused into his Ethio-jazz music.

Hanging from the ceiling of one shop were dozens of the one-stringed violin-like instruments known as masinko which are played with a bow. 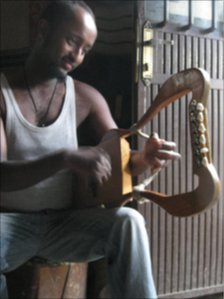 It was like fishing for instruments in the roof of the house as the shopkeeper used a pole to bring down a krar – a five- or six-stringed Ethiopian harp.

To hear them played well, I visited Yod Abyssinia, a cultural centre where the mostly Ethiopian audience is treated to traditional music, dance and food.

Here the music is played in its pure form but Mr Mulatu is on a mission to develop the instruments so the players are not restricted.

“I have a very high respect for our cultural instruments. I have tried to develop the krar. I changed it from six to eight strings and managed to play for the first time songs like Guantanamera, Mercy Mercy and Summertime.

“For 3,000 years we couldn’t play anything except five-tone music on the krar. My aim is to develop one with 12 strings,” Mr Mulatu said.

I wondered if there was not also an argument for leaving the instruments in their purest form.

“Some believe that but I don’t. Look, why do you think most young people go to the guitar?” asked Mr Mulatu.

“It is because the traditional instruments limit them – they cannot do what they want to do. On the guitar, they can experiment. If I can develop the krar so it can do what the guitar does, they will be playing their own instruments and they can also contribute to the world different sounds.

“When you have been kept to five-tone music all your life and you start playing 12-tone music you can do miracles. So it develops the instrument and the mind.”