Learning to live with autism in Ethiopia

The year was 1995 and Ethiopian Zemi Yunus had no idea what autism was. What she did know was that her four-year-old son, Jojo, was clearly “different from other children of his age.”

Then her husband watched a television programme in the United States where they were living at the time.

It suddenly dawned on them that perhaps Jojo was autistic – certainly the symptoms described all seemed to point to this.

On the brink of returning to Ethiopia, Mrs Zemi began in earnest to research the issue.

Like many parents of autistic children, Mrs Zemi says that she had long had concerns about her son’s speech, but many doctors had reassured her that boys are often “late talkers” and assuaged her fears. Jojo is now 20 and has recently started uttering some words

But the more she found out independently, the more she recognised that her son’s delayed speech, as well as his repetitive actions and his behavioural difficulties, were clearly autistic.

Unfortunately, diagnosis of the condition, particularly in the developing world, is rare. On returning to the Ethiopian capital, Addis Ababa, Mrs Zemi – who was soon running a successful business – consulted psychologists, doctors and other professionals for several years, but failed to find any answers.

Finding a school also proved difficult; many teachers dismissed Jojo as “spoilt” and he was expelled from five schools in a row. One institution even asked to be paid triple the usual fee to keep him.

By this time Mrs Zemi had done extensive research, and knew that autism was probably a widespread condition in the region. 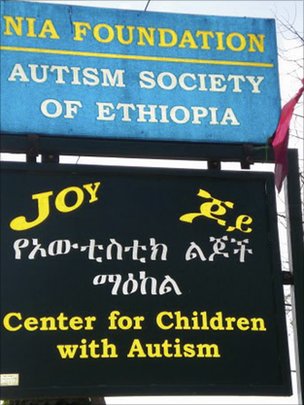 In Ethiopia, though, no-one was talking about it publicly but she persevered. She began looking for other affected parents and what she found shocked her; families with autistic children mostly kept them at home, often in darkened rooms.

She even saw one little girl who was kept with her hands tied behind her back – most likely to prevent her from hitting or striking herself. This is not uncommon behaviour among children on the autistic spectrum, especially when distressed. >>READ MORE on BBC