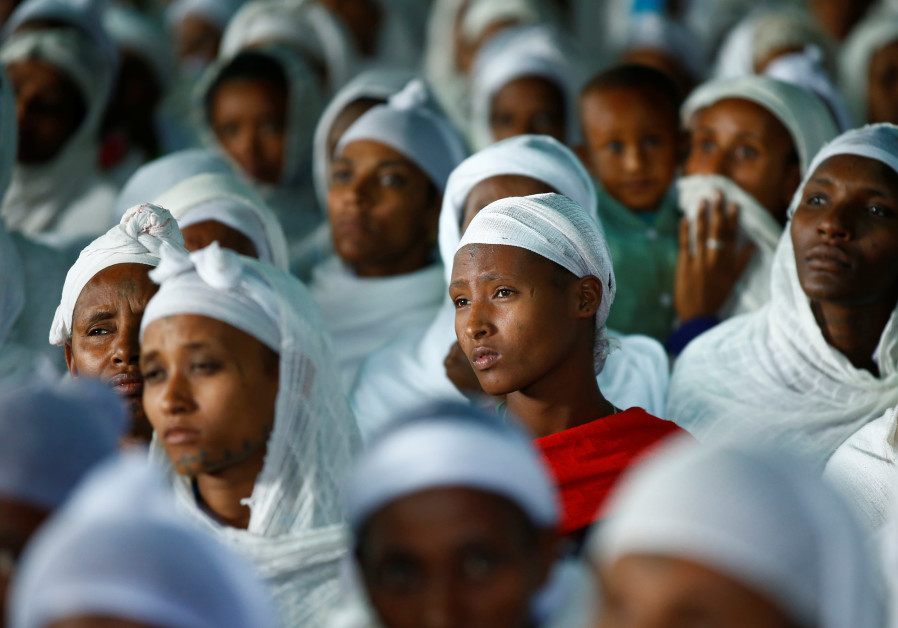 Ethiopian Jews celebrated Israel’s independence in Ethiopia in a moving video showing their solidarity with the State of Israel.

The video was filmed and edited by YouTube personality Ezra Tubi. Tubi has often appeared on the YouTube channel “Boomerang Fighting for Israel.”

Tubi’s film captures a religious Ethiopian community’s celebration of Israel’s 70th year of independence. The film opens with a member of the community running through the town holding an Israeli flag as others cheer and join him. School children are shown drawing blue and white flags of Israel while others wave flags and dance in the village.

“Don’t forget us,” says the flag bearer after he finishes his procession around the village.

“The last 8000 remaining Ethiopian Jews are still waiting to return to and reunite with their families in Israel. It is time to finally bring them back home. The time has come,” read the film’s closing subtitles.

Ethiopian Jews began emigrating to Israel following the March 14, 1977 law stating that the Israeli Law of Return applied to the Beta Israel community, as Ethiopian Jews are also known.

On February 28, 2018, members of the Jewish community in Ethiopia gathered to express their longing to be united with their families in Israel, calling on the Jewish State to allow them to immigrate.

The events took place in synagogues in Gondar and Addis Ababa, where thousands of Ethiopians have been waiting for years for the Israeli government to approve their requests.

The event, held in conjunction with the Fast of Esther, concluded with the singing of the Israeli national anthem, “Hatikva,” and the song “Am Yisrael Chai” (the people of Israel live). Participants held up pictures of loved ones in Israel, who had immigrated long before them; in some cases, families have been separated for over 20 years.

During the event in Gondar, teenagers led the children in the singing of “Hineh ma tov u’ma na’im, shevet ahim gam yahad” (“How good is it when we dwell together with our brothers”).

Eighteen-year-old Ermias Gebre read a letter in Hebrew to the prime minister, on behalf of “all the Jews who have been left behind.”

“You have said so many times, ‘It is forbidden to give up hope.’ We have learned from you and we will not lose hope…. The honorable prime minister, please, do not forget about us!” the letter read.

According to the two latest cabinet decisions on the issue, held in November 2015 and in August 2016, an estimated 9,000 Falash Mura, Ethiopian Jews whose ancestors converted to Christianity, may be brought to Israel by the end of 2020, starting with 1,300 who were brought in 2017.

The 9,000 is only the potential number, of which the government will accept those who meet the ministry’s criteria.

Over two weeks ago the Interior Ministry and the Prime Minister’s Office told the State Control Committee that within four weeks the government would approve the immigration of 1,000 Ethiopians residing in Gondar and Addis Ababa in 2018, as a new cabinet decision is needed to allow for continued aliya from Ethiopia this year.

Funds to implement the decision have yet to be allocated from the 2018 reserve budget.

Future immigration from Ethiopia is also yet to be put on the agenda for the 2019 state budget, which will be closed in two weeks.

During this past Sunday’s cabinet meeting, the issue of the Ethiopian immigration and family reunification was on the agenda but was not discussed. “We ran out of time,” a representative of the Prime Minister’s Office told the advocacy group Struggle for Ethiopian Aliya.

The group accuses the government of stalling, and does not believe it will allocate the funds for the remaining Ethiopian Jews to make aliya.

“We demand from the government to carry out its obligations to bring the remaining community to Israel and put an end to the suffering of so many families,” the group said.

Twenty-year-old Yetayesh A., a combat soldier in the Search and Rescue Unit of the IDF, immigrated to Israel 12 years ago, and has been waiting to be reunited with her father, who was left behind in Ethiopia, ever since. Her father stood in the Hatikva Synagogue in Gondar this morning, holding a picture of his daughter in her army uniform.

“While I am serving my country, I am also in a fight over the basic rights of my father, who deserves to immigrate to Israel like any other Jew,” Yetayesh said.

Likud MK Avraham Neguise, who spearheaded efforts to bring Ethiopians to Israel, said: “The situation that families are forced to live in separation from their loved ones, part of them in Israel and part waiting to immigrate, is very sad. Every day I come into contact with heart-wrenching stories of longing from members of the Ethiopian community in Israel who have family in Israel. I call on the Israeli government to uphold its decisions and to stop procrastinating on this issue. This is a national and moral obligation of the government.”