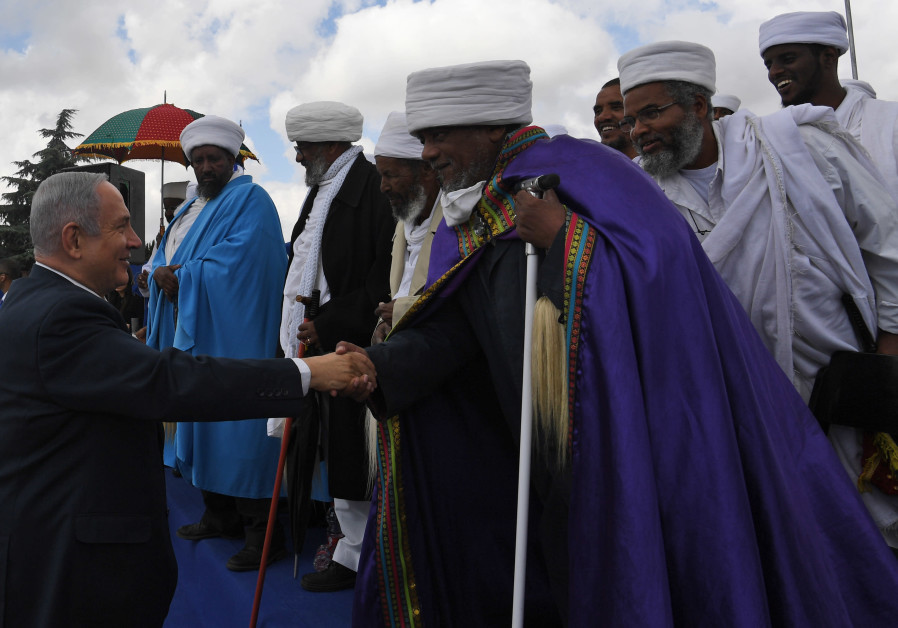 Benjamin Netanyahu at a remembrance ceremony for Ethiopian Jews who lost their lives on their way to Israel in Mt. Herzl, Jerusalem Day 2018.
(photo credit: KOBI GIDEON/GPO)


In 1984, Israel evacuated some 8,000 Ethiopian Jews from the Sudan. The Ethiopians had been trapped there in a civil war caused by famine.

During May 24-25, 1991, in yet another covert operation, Israel airlifted more than 14,000 Jews from Ethiopia and brought them on 35 non-stop flights to Israel.

The planes were overcrowded and the people were frightened, but it was a faster and more preferable way of getting to Israel than trekking across the desert for weeks, months and even years.

Many of those who had no choice other than to travel through the desert died along the way. They had been caught up in the dream of one day seeing Jerusalem, but it was a dream that for some 4,000 Ethiopian Jews who fell victim to illness, starvation and physical attack, was never realized.

Both President Reuven Rivlin and Prime Minister Benjamin Netanyahu, in their addresses on Mount Herzl on Sunday at a state memorial ceremony commemorating Ethiopian Jews who died en route to Jerusalem, underscored the special attachment that Ethiopian Jews have to the city.

Ethiopians identify with Jerusalem more than any other immigrant community, said Rivlin.

Among the Kessim in their traditional robes, and relatives of the deceased, were members of the family of Avera Mengistu, one of two Israeli civilians who wandered into Gaza and are believed to be held captive by Hamas.

Rivlin and later Netanyahu pledged that Israel would not rest or remain silent until Mengistu is returned home.

Rivlin revealed that during his recent state visit to Ethiopia, he had asked President Melatu Teshome to help in the battle for Mengistu’s release so that he could rejoin his family.

Rivlin spoke of Israel’s obligation to do all that it can to obtain Mengistu’s freedom from captivity.

While he was in Ethiopia, Rivlin said he began to realize the significance of the bond that Ethiopians have with Jerusalem.

The president emphasized the importance of the retelling of the story of the hardships under which Ethiopian Jews came to Israel. The story should not be something they preserved only for themselves, he declared, but should be taught in schools and academic institutions where it is important to include the Ethiopian Jewish legacy in the teaching curricula.

Praising the courage and conviction of Ethiopian Jews, who often had to wait for years to get out of Ethiopia and then trekked for weeks and months across Sudan in all weathers – hungry and thirsty, beset with a variety of life-threatening illnesses, and not always able to defend themselves from looters and cruel soldiers – Netanyahu said that the realization of the dream began with a trickle that increased to a stream, becoming a stirring and exciting chapter in the saga of Jews returning to their ancestral homeland.

Netanyahu noted that many of the arriving women had made the perilous journey with children walking alongside them and while carrying babies on their backs.

He was also full of admiration for the way in which Ethiopian Jews banded together and cared for each other. “The people of Israel can learn so much from you about love for Jerusalem and mutual responsibility,” he said.

In a reference to those who died along the way, Netanyahu said that the moving story could be summed up by a brief note left on one of the graves. “My body lies here, but my heart is in Jerusalem.”