(CNN) — It was another December afternoon back in 2000, spent like hundreds of others combing the rocky hills of the Dikika region, when Ethiopian scientist Zeray Alemseged heard one of his assistants nearby calling him.

“He said ‘oh, doctor I see something there,'” recalls Alemseged, who’d been excavating the hot and dry landscape for over a year, helped only by a small inexperienced crew of locals. “And I went there and I see the cheek bone part … sticking out of the rock. I turned it upside down and my jaw literally dropped.”

Instantly, Alemseged realized this was an extraordinary discovery that could make scientific history. 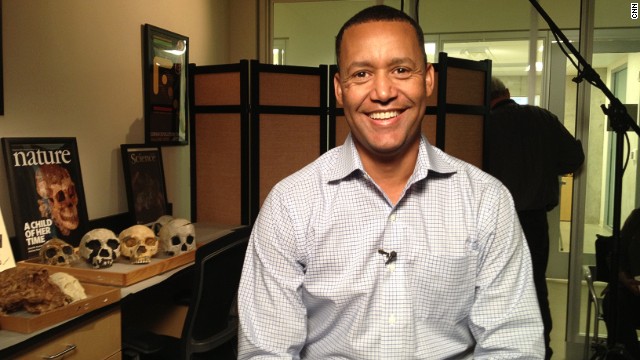 Zeray Alemseged’s achievements have made him a hero in the world of science. Today, he is the director of anthropology at the California Academy of Sciences.

“Right away I could tell this is a child of a human ancestor,” says the paleoanthropologist. “You have this child in a block of sandstone, with the baby teeth still visible, very vertical forehead, small canine,” he adds. “But it’s so rare and so unbelievable that I just couldn’t accept that was the case, that what I saw was the skeleton.”

Yet Alemseged did not want to make news of his discovery public until he had a more complete picture of what he’d unearthed. So he kept it quiet as he meticulously prepared and analyzed the fossil.

“The skeleton was encaved in a block of sandstone matrix, which is very densely compact, very inured sand, so that I had to go remove the sand grain by grain,” says Alemseged.

“So I took my time, and people advised me to employ technicians, and technicians can do that job, but I said ‘no, it’s going to take as long as it takes but I’m not going to delegate this work of the exploration of this unique child to anyone else but me.'”

Alemseged then spent years in the lab painstakingly picking away the sand grain by grain. By using a super microscope, he was able to see details in the teeth embedded in the skull that revealed to him the skeleton’s age and the sex. He now knew the fossil was that of a three-year-old girl who had died 3.3 million years ago. >> Read More on CNN

Death on the Nile -Inside Story : AlJazeera