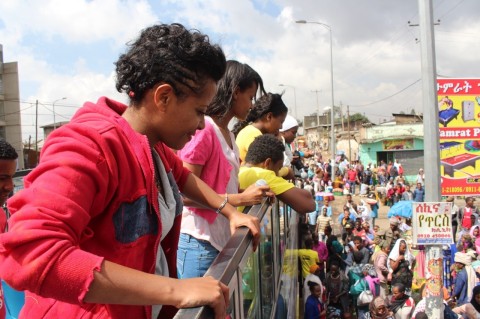 The conservative paper was celebrating the withdrawal of British funding for an aid project in Ethiopia it has dubbed “the Ethiopian Spice Girls.” These “girls” are a five-member all-female band known as Yegna, or “Ours.” It was founded three years ago and produces a radio drama and music videos aimed at helping girls through the perils of adolescence in Ethiopia.

The Daily Mail attacked the project for years with a string of vitriolic articles, calling Yegna “the most wasteful, ludicrous and patronizing” aid project in Africa. That coverage apparently convinced Britain’s Department for International Development to withdraw its funding on Jan. 6.

Yet the aid agency had previously given the program high marks, presenting it as an innovative way to empower Ethiopia’s young women. And while Ethiopia is the second largest recipient of British aid, getting $470 million a year, Yegna received only $6.4 million in total from the British government from 2015 to 2018.

Aid workers and activists say the rush to scapegoat Britain’s aid policy not only hurt a program that is helping adolescent girls but unfairly attacks the idea of using media for social change, a method development workers say is getting good results around the world.

The show features the five members of Yegna, each from different backgrounds, confronting and overcoming many of the challenges specific to Ethiopia’s young women. Girls in this nation of 100 million suffer alarming secondary school dropout rates, domestic violence and a culture that in many places restricts them to doing chores at home. Many young women are also forced into early marriages.

The program was an initiative of Girl Effect, an organization that advocates for more development programs focused on young women across Africa. In Ethiopia, it hit on the idea of using music and entertainment to convince its audience rather than typical public service announcements.

“Music is deeply rooted in Ethiopian culture,” said Selome Tadesse, Yegna’s managing director, pointing out that both young woman and their parents responded to the tactic. “If there is anything that will bring the Ethiopian people together, it is music.”

The band has put out more than 20 singles and produced eight seasons of the radio drama, which consists of weekly hour-long shows tackling forced marriage, teen pregnancy, taboos around menstruation and other topics.

Though the project has only been running three years, its organizers already cite substantial attitude changes, based on independent annual surveys carried out by advertising agency M&C Saatchi — part of the monitoring requirements of the program.

According to the latest survey, conducted in 2016, 76 percent of the girls who listen to the show say it inspired them to stay in school. Listeners are also twice as likely to agree that parents beating their children should be reported to the authorities compared to those who don’t listen to the show. Some 3,000 schools in the Amhara region also use the radio program as part of their teaching materials.

Edem Birouk, a slight 17-year-old student in Addis Ababa, said the radio drama is the only show that talks about girls’ issues. “It helps us cope because the characters in the drama are around our age,” she said. “We learn how to deal with the issues they face, whether it is harassment or issues of self worth.”

Her friend Sarra Ayele, 16, said the show has encouraged her to open up to her mother and discuss the challenges she faces. “Since it’s not what I used to do, my mother finds it very surprising,” she said with a shy smile. “My mother now tells me her experiences and it makes her happy.”

[A state of emergency has brought calm to Ethiopia. But don’t be fooled.]

The challenge is also getting boys and adults to listen to the show as much as they listen to the group’s songs. “Those who harass girls on the streets would be less likely to do so if they were regular listeners because they would then get what it does to the girls,” said Hikma Jamal, 16.

Yegna isn’t the only project in Ethiopia that uses media to challenge deep-seated social behaviors. In fact, it’s a tactic increasingly used by international development organizations.

“There is still a lot of skepticism on the influence of media for social change,” admitted Bill Ryerson, founder of the Population Media Center, which has been producing radio dramas and soap operas for development purposes across Africa since long before Yegna appeared on the scene. But Ryerson said social research proves that well-produced, well-written dramas are the best way to tackle such intractable problems.

For Ethiopian women’s rights activist Sehin Teferra, the fate of Yegna is a lesson not only in tactics but the limitations of foreign funding — and how much anti-aid sentiment exists in many countries.

The United States is no exception: President Trump’s transition team sent letters to the State Department asking pointed questions about aid to Africa as well as international programs promoting “gender equality,” suggesting there could be a major rethink in the U.S. aid approach.

“This is always the problem with the aid model,” said Teferra. “The funding can be taken away.”

The show will attempt to continue with other sources of funding.