“I did not think I would set a record, but I am not surprised I set a record,” Dado said through an interpreter. “My (form) was good, so I didn’t want to waste time because of the weather. It was cold (and) windy, but I just stayed with my pace, which was very good. 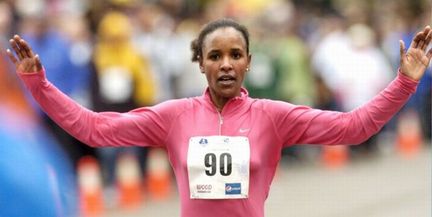 Dado broke away from the field midway through the race and never looked back.

She didn’t have to, since defending champion Genovena Kigen, 29, of Kenya, was a distant second with a 1:24:52.

McGregor was not surprised by Dado’s dominating effort.

“She didn’t really surprise me,” McGregor said. “She’s run a couple of major marathons, and she’s run a 2:25 for a marathon and 1:09 for a half (marathon). I knew she was going to go out and get after it.

“Once she took off, I was hoping to just have a decent race and go for the U.S. championship. I didn’t want to go out too fast and then die toward the end, because there were still some good U.S. people here.

Dado was coming off a first-place finish at the Rome Marathon.

McGregor added that the weather conditions had nothing to do with her third-place finish.

“Actually, the weather wasn’t as bad as we all thought it was going to be,” McGregor said. “The wind wasn’t as big a factor. We lucked out. It could have been a lot worse around here.”