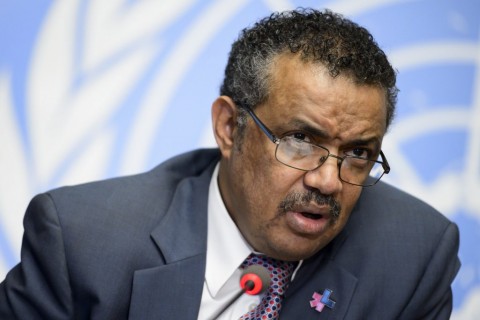 Ethiopia’s Tedros Adhanom Ghebreyesus is a candidate for director general of the World Health Organization. (Fabrice Coffrini/AFP via Getty Images)

ADDIS ABABA, Ethiopia — Despite warnings from its own experts, the World Health Organization took two months to declare the devastating Ebola outbreak in 2014 an emergency, during which time 1,000 people died in West Africa. Leaked emails later revealed that officials were loath to call it an epidemic for fear of angering the African countries involved and hurting their economies.

The WHO’s handling of the outbreak, which went on to kill more than 11,000 people, has been seen as a sign of the desperate need to reform this global organization, which is responsible for marshaling the global response to epidemics.

On May 22, member state will choose among three candidates — all of whom have pledged deep changes to the organization — vying for the post of WHO director general. One of the candidates, however, has been accused of the same kind of emergency-related minimization of crises that marred the WHO’s response to the Ebola outbreak.

Tedros Adhanom Ghebreyesus, 52, Ethiopia’s health minister from 2005 to 2012 and foreign minister until 2016, is a strong candidate for the post, backed by the African Union as well as countries in the Pacific and the Caribbean. He has an impressive track record in Ethiopia. The country also covered up cholera outbreaks under his watch.

The candidate, who goes by his first name and campaigns as Dr. Tedros, presided over a dramatic expansion of Ethiopia’s health system and reductions in infant and maternal mortality as well as deaths from malaria. He also extended the reach of the health system deep into remote rural areas.

In the past 10 years, Ethiopia is also the only country in the Horn of Africa that has not been touched by cholera — according to the government. Critics disagree.

Since a cholera outbreak in 2006 in the Oromia region, Ethiopia has referred to the disease as “acute watery diarrhea” (AWD), essentially a symptom of the deadly waterborne cholera, which is caused by the Vibrio cholerae bacterium. Tests at the time by the United Nations confirmed that it was actually cholera.

The likely rationale for not calling the disease cholera is the same one that delayed the labeling of the Ebola outbreak an emergency in 2014 — it would make Ethiopia look bad, hurt tourism and could result in some countries banning food exports from Ethiopia.

It is not clear whether Tedros had any input in the government’s decision to stop using the term “cholera,” but the change occurred during his tenure as health minister.

Since then, there have been several AWD outbreaks, including in Addis Ababa in 2016 and in the drought-hit Somali region, where more than 16,000 have been diagnosed since January and 3,500 new cases are being declared every month. None have been identified as cholera.

Yet under the rules of the WHO, countries are supposed to report outbreaks of such diseases.

“In the aftermath of the unconscionable WHO response to Ebola, perhaps the most important global health norm is to accurately and rapidly detect, report and respond to disease outbreaks,” said Lawrence Gostin, director of the O’Neill Institute for National and Global Health Law at Georgetown University.

The Ethiopian government is fighting the outbreak, regardless of what it is called. The Health Ministry sent 1,200 health professionals, including 500 nurses and 68 doctors, to affected areas this year and set up 100 treatment centers.

On Tuesday, the ministry issued a statement carried on Tedros’s website that said: “We are working to establish robust surveillance systems for critical diseases … acute watery diarrheal diseases including cholera is of course included in this effort.” The statement went on to praise Tedros’s tenure as health minister and noted that “despite hosting the largest number of refugees in Africa, Ethiopia has a lower rate of childhood deaths from diarrheal diseases than Africa as a whole.”

But international aid organizations have privately expressed frustration at Ethiopia’s refusal to call the disease cholera; such a move would trigger an international response.

Human Rights Watch says local health workers are under pressure not to refer to the disease as cholera.

“We have interviewed a number of health professionals who have been pressured by government officials not to refer to cholera outbreaks as such, instead referring to outbreaks as ‘diarrhea’ or AWD,” said Felix Horne, the organization’s researcher for Ethiopia. “This is emblematic of the control that government exerts over some of its health professionals — there is little space to question health policies or to challenge the government’s success narratives.”

So while neighboring Somalia, South Sudan and Kenya have cholera outbreaks, Ethiopia just has diarrhea outbreaks.

The Ethiopian Medical Association has endorsed Tedros’s candidacy, saying Wednesday that he would bring a fresh perspective to the WHO. “One that is rooted in the reality of what it takes to design and implement change in a country that is resource-constrained with a high disease burden,” said the association’s president, Gemechis Mamo. He would not comment on the cholera-denial accusations.

“We have been informed that it was acute watery diarrhea,” he said.

Critics say the lack of transparency is part of the repressive nature of the state. Much of the opposition to Tedros’s candidacy emanates from the Ethiopian diaspora, which has taken to social media to criticize his ties (he is a member of the ruling party political bureau) to a government known for its poor human rights record and for suppressing debate. Their campaign even has its own hashtag.

#NoTedros4WHO: Embezzled USD1.4 billion from Global Health Fund,& Now a candidate for WHO DG?! SCANDAL OF THE CENTURY! @WHO @BBCWorld @CNN pic.twitter.com/GWZK3XwtbO

The opposition, though, is increasingly mixed up in the bitter ethnic politics of Ethiopia. Tedros, like many influential people in government and business, is from the northern Tigray region, home of the rebel group that overthrew the socialist regime in 1991.

Some from the larger Oromo and Amhara ethnic groups, which together make up nearly two-thirds of the country’s population, allege favoritism by the government for the Tigrayans — leading Tedros supporters to dismiss their complaints as ethnically driven.

The failing minority media @ESATtv which claims to stand for ALL Ethiopians irrespective of ethnicity, is against DrTedros b/c he’s Tigriyan

In interviews, Tedros says he has the practical and managerial experience to deal with global health challenges.

“I was born in Africa, I was brought up in Africa, and I have seen firsthand how actually, the scourge of diseases — it has affected communities, my own village and also communities, and even myself as a victim,” he said in a January interview.

At the same time, it is an open question whether he would be able to heed the desires and demands of the WHO’s many members, some of which, like the Ethiopian government, might want to play down the effect or presence of some of these diseases.