Thousands gathered at City Hall in Belfast for the start of the race
Ethiopian runner Urga Negewo has won the 29th Belfast Marathon in an exciting finish at Ormeau Park.
Negewo, 24, sprinted away from Belfast-based Kenyan John Mutai in the closing stages to win in a time of 2hrs 16mins and 53secs.
Mutai was going for his fourth win in succession in the race.
Sarah Stradling from England won the women’s competition while Darrell Erwin from Ballymena prevailed in the wheelchair race. 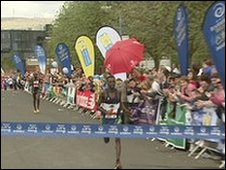 Thousands of people, including many fun runners and relay competitors were still completing the course on Monday afternoon.
They were enjoying near perfect conditions for marathon running, with the weather dry but cool.
A total of 3,300 runners entered the main race which began at the City Hall at 0900 BST and finishes at Ormeau Park.
They are joined by 11,000 relay runners, 2,350 walkers and 1,500 fun runners in various events.
Disruption is expected on a number of roads in the city during the day.
This year, pacers have been introduced to the marathon for those attempting to finish the 26.2 mile race in times of three hours, three and a half hours, four hours and four and a half hours.
Source: BBC

A cup of Ethiopian Origin Coffee For $ 12 Dollar

Have been looking at doing SEO and improving the design on my site for a long time, so this post has been very useful. Clear read also, so thanks!