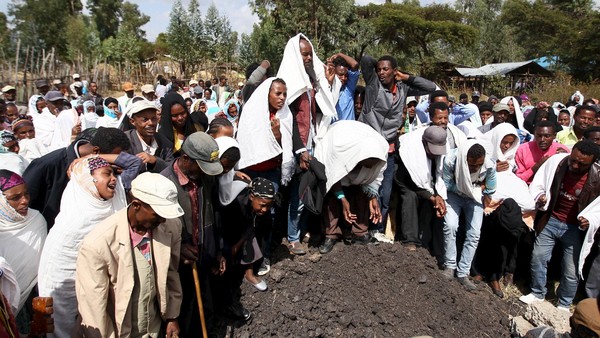 Mourners at the funeral of a woman killed during a December protest in Holonkomi, a town in Oromia province

A dispute that started over a football field has evolved into one of the biggest challenges to the Ethiopian state since the end of the civil war a quarter of a century ago.

When local officials expropriated the school pitch for developers, students took to the streets of Ginchi, a small town 80km from Addis Ababa, the capital.

Their protest was swiftly put down. But the incident was symptomatic of a wider collision in one of Africa’s fastest-growing economies as the government seeks to transform a predominately agrarian society through industrialisation, commercial farming and urbanisation.

The Ginchi protest was the first spark in an outpouring of opposition to local and federal government in which at least 140 people died between November and last month, according to human rights groups. The protests spread across Oromia state, home to millions of subsistence farmers from the Oromo, the largest group in Ethiopia’s federation of ethnic nationalities.

Their anger was directed at local governments affiliated with the ruling Ethiopian People’s Revolutionary Democratic Front (which with its allies controls all 547 seats in parliament) because of perceived corruption plaguing land deals as speculators surf rising property prices in towns around the capital.

At the same time they accuse the federal government of riding roughshod over local sensitivities with a plan to extend administration of overcrowded Addis Ababa into Oromia, which surrounds the capital.

“The master plan is about taking Oromia land and expanding Addis. It will create job opportunities but not for the farmers because their land is being taken,” says a labourer in the satellite town of Sululta.

Sululta, where factories and new housing developments encroach on traditional farmland, was one of about 30 Oromo towns that were the scene of mass protests in December. Peasant farmers pouring down on horseback from the hills to join protesting students were met with tear gas and bullets.

Elsewhere police stations and symbols of the state were attacked. In some isolated incidents so were private businesses.

“They are giving permission [to build] for the people who are rich but they are not giving permission for poor people,” said a farmer near the town of Chancho. He had been unable to obtain a permit to build a house for his son on his three-hectare barley plot, and had one mud construction torn down near a towering cement plant. Another farmer said he was given tiny compensation when compelled to surrender land to local officials who sold it on. 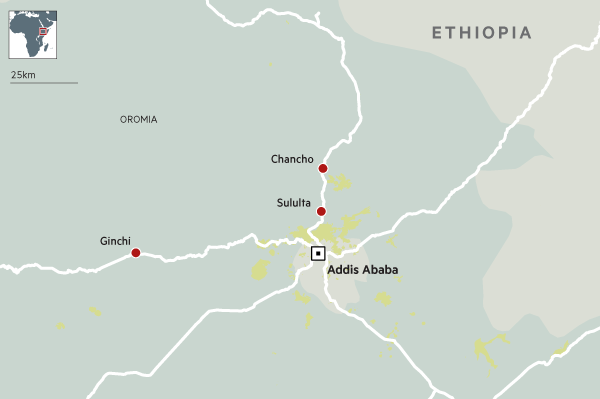 Such parochial grievances conflate with broader frustration among the Oromo at the perceived dominance in federal institutions of the Tigrayan ethnic group. Oromos make up about 40 per cent of Ethiopia’s 90m population, Tigrayans, who spearheaded the 1991 revolution, about 6 per cent.

“This is a popular uprising against political marginalisation, non-representation and corruption,” says Merera Gudo, head of the opposition Oromo Federalist Congress and one of the few senior members of his party not under arrest.

The government a month ago shelved the blueprint to expand Addis. Since then an uneasy calm policed by security forces has settled over the region.

But the episode has exposed a fundamental contradiction in the way Ethiopia is governed — between the federal state as enshrined in the constitution and the reality of centralised, authoritarian power.

“The master plan was intended to co-ordinate planning between Addis and satellite towns . . . Infrastructure would be developed, bottlenecks in housing addressed and the dynamic of the economy maintained,” says Arkebe Oqubay, a minister and former Addis mayor who acknowledges there was insufficient consultation with those likely to be affected. “It left room for misinterpretation and proper explanation has not been done,” he adds.

You need JavaScript active on your browser in order to see this video.

Abel Belete, a political analyst in Addis, says it was unprecedented for Ethiopian authorities to back off in this way under popular pressure. “It is a sign of weakness,” he says.

Despite the climbdown, underlying tensions remain, with the population appearing cowed rather than persuaded.

He recognises efforts by the government of Hailemariam Desalegn, prime minister since 2012, and Meles Zenawi, his predecessor, to deliver services, create jobs and invest in infrastructure. But like many of the 100,000 graduates emerging from new universities each year, he wants greater democratic rights and opportunity.

“We are not free to express ourselves. That means people are not involved in the development process,” he says.

Ethiopia’s semi-authoritarian government has fostered some of the fastest economic growth in Africa while resisting liberal market orthodoxy and giving the state a central role in development. It is an experiment keenly watched by other African governments more constrained by democratic process.

But the Oromo protests are interpreted by some observers as one sign that Addis Ababa’s strategy also has limits.

“Ethiopia is undoubtedly fragile even if the underlying state is strong,” says an Addis-based diplomat from the region.

Copyright The Financial Times Limited 2016. You may share using our article tools.

Please don’t cut articles from FT.com and redistribute by email or post to the web.

Road linking Kenya to Ethiopia to be completed in six months – The Star, Kenya