Members of the Ethiopian diaspora and U.S. human rights groups want the U.S. government to put pressure on its Horn of Africa ally Ethiopia to implement democratic reform, ahead of parliamentary elections Sunday.  But Africa experts say Washington has little leverage to effect change.

Ethiopian-Americans recently marched from the State Department to the White House demanding that U.S. officials put pressure on Ethiopia’s government to free opposition leader Birtukan Mideksa.
Birtukan, along with other opposition politicians and Ethiopian journalists are currently in jail on allegations of undermining state authority. They aren’t able to report or run in Sunday’s parliamentary elections. 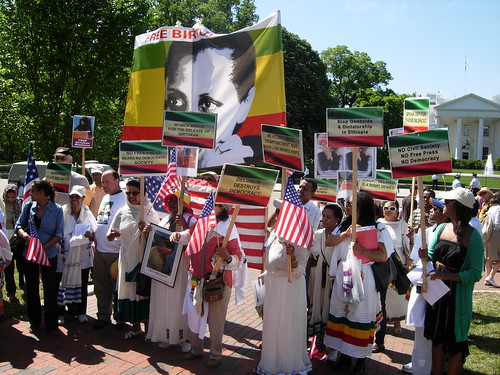 Ethiopian-American Hana Haile was one of the protesters in Washington. She says this demonstration would not be possible in Ethiopia.

“There would be a lot of fear of retaliation against us for this march,” she said.  “There could be lots of gunshots and lots of deaths. And that’s what we want people back home to experience the same as we do here.”

Ethiopian officials say their democracy is a work in progress and that the elections will be free and fair.

Africa expert J. Peter Pham, from the National Committee on American Foreign Policy, says Ethiopia is such an important ally that the U.S. must cooperate with its government, however imperfect.

“Ethiopia has been an important and pivotal state in the Horn of Africa subregion for many years and all the more so in this particular period of history when we have utter chaos in most of the former Somali state, the prospect of a breakup of Sudan and other tensions in the area with Kenya, with elections coming up.”

Terrence Lyons, at George Mason University, says the Obama administration has tried to modify the relationship.

“During the Bush administration, policy toward Ethiopia was very heavily dominated by counter-terrorism concerns,” he said. “President Obama, I believe, is trying to re-calibrate the relationship so that human rights, democracy and other issues reach equal status with the counter-terrorism agenda.”

Lyons says the United States has little leverage in Ethiopia, where China, India and Saudi Arabia have larger business interests.

He says it takes sacrifice to bring change.

He says demonstrations and sanctions helped topple apartheid in South Africa. And he says that’s a good example of what he hopes will happen in Ethiopia.