Ethiopian-born Jews on life in Israel: 'It was always my dream to come to Jerusalem' – Washington Post 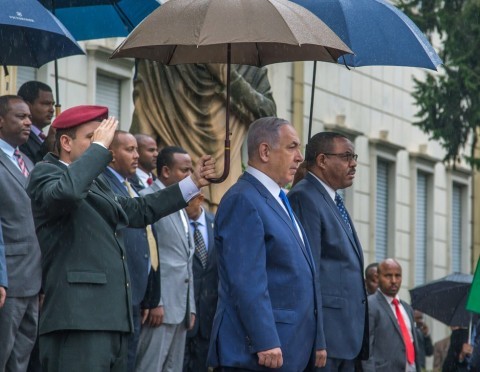 ADDIS ABABA, Ethiopia — Israeli Prime Minister Benjamin Netanyahu’s historic trip to East Africa last week was aimed at boosting relations. But his last stop, in Ethiopia, held special meaning for many of the 135,000 Jews of Ethiopian origin who live in Israel today.

Netanyahu is the first Israeli leader to visit the East African country. Formal ties were established between the two states in 1992.

Most Ethiopian Jews arrived in Israel in secret immigration operations that took place in the mid-1980s and early 1990s. In Operation Moses, during the ’80s, roughly 8,000 people were smuggled out of Ethiopia via Sudan and taken to Israel on secret flights organized by the Mossad, the Israeli foreign intelligence service. In Operation Solomon, in 1991, about 14,500 people were airlifted to Israel in less than 36 hours.

More recently, the immigrants have arrived via regular flights almost every month, yet an estimated 9,000 to 20,000 Ethiopian Jews remain in Ethiopia.

Here are a few of their stories:

In 2013, Pnina Tamano-Shata made history when she became the first Ethiopian-born woman to join the Israeli parliament. Her family made its way to Israel, via Sudan, when she was only 3. After nearly a year in a refugee camp, Israeli agents flew them to Israel in Hercules cargo planes. Tamano-Shata’s mother, however, was mistakenly left behind.

She spent her first year in her new country without her mother.

“I remember how hard it was,” the former parliamentarian said. “For the first time in my life, I really understood what it meant to be different. I did not have any friends, and the children used to throw stones at me.”

But Tamano-Shata said the barriers she faced pushed her to seek a career in politics. In college, she became the voice of the student protests, standing in the midst of large crowds with a microphone, to decry discrimination against her community.

After gaining a seat in the parliament in 2013, she made headlines when she offered to donate blood but was told that Israelis of Ethiopian origin were not allowed to donate for fear of spreading HIV. She has been pushing for change even since.

“I believe in integration,” she said. “There are so many programs for Ethiopian immigrants, but it’s all about keeping them separate from Israelis.”

“There is so much I want to do,” she said. “I can’t wait to get back into politics.”

Daniel Sahalo remembers walking through the night from his village in northern Ethiopia to reach the Sudanese boarder. As a child, Daniel Sahalo spent more than a year in a refugee camp before arriving in Israel in 1984. (Ruth Eglash/The Washington Post)

“Most of my life I heard people talking about going to Jerusalem, but we never knew that there was a Jewish state,” said Sahalo, who was only 5 when he left Ethiopia in the mid-1980s.

At the time, there were no formal ties between Israel and Ethiopia, so most of the community had to leave the country in secrecy. About 4,000 people died on their way to Sudan. Sahalo’s family buried a sister who died of malaria on the way.

“We buried her and kept on walking. We walked for nine weeks,” he said.

The family then spent nine months in a refugee camp, where he became so malnourished that his “belly was really swollen.”

“I spent my first few weeks in Israel in a Jerusalem hospital,” he said.

What shocked the young Ethiopian boy most, Sahalo said, was suddenly learning that there were white Jews in the world. “We were so isolated. I thought all Jews were black,” he said.

In Israel, Sahalo also was sent to a boarding school and later studied international relations at Hebrew University of Jerusalem. He now works for the Ethiopian-Israeli jewelry-making company Megemeria.

Mintamy Ameha arrived in Israel from Ethiopia three years ago. She and her family had been living in Addis Ababa, the Ethiopian capital, where they had been struggling with their Jewish identity, until their departure for Israel. “In Ethiopia, we could not keep the Sabbath, but here you are free to keep it if you want to or not keep it if you don’t want to,” said Ameha, who is beginning her last year of high school.

“I miss life in Ethiopia, I especially miss my aunt who had to stay behind, but I can buy everything I like here, we can make injera [an Ethiopian bread], and we can listen to Ethiopian music here,” she said.

At first, she said, fitting in and meeting other Israeli girls her age was difficult. But she now attends a boarding school and has many Israeli-born friends.

Speaking fluent Hebrew without any detectable accent, Ameha said she feels as if Israel is her home.

Melisa Alahey grew up in a farming village in northern Ethiopia, near the city of Gondar. Melisa Alahey at the Absorption Center of Mevasseret Zion,  outside of Jerusalem. (Ruth Eglash/The Washington Post)

“It was always my dream to come to Jerusalem, and everything here is even better than I expected,” said Alahey, who does not speak Hebrew and communicated via a translator.

Alahey said that when he thought that his family had a chance to come to Israel, they sold their home and belongings and moved to Gondar to wait to immigrate. But the process took six years.

“We really suffered during that time, we had no work and no help,” he said. “We suffered abuse in Gondar. The people there did not like us because we were Jews.”

Alahey said there are more than 9,000 people still waiting in Gondar to immigrate to Israel. The conditions there are harsh, he said.

“I hope the visit by the prime minister opens the door to allow my brothers and sisters waiting there to come here, too,” he said.