“The last time I saw my son he was in his bedroom playing Xbox 360,” recalls 42-year-old Hassan. “The next day he just left with a group of friends, then called in the afternoon and said he was somewhere playing basketball.”

It was hardly an alarm bell, an American teenager playing computer games and basketball on a quiet weekend last November, just after Thanksgiving. But 18-year-old Aman Hassan Yemer would not return to his home in Alexandria, Virginia.

Instead, he and four friends surfaced thousands of miles away in Pakistan, where they have since been indicted on terrorism charges.

“I was just amazed by this news,” recalls Hassan, who asked the BBC not to use his full name. “He didn’t even take any luggage or clothes, so it’s kind of hard to swallow.” 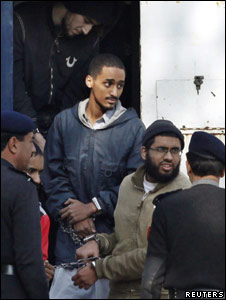 Hassan, an Ethiopian-born American citizen, insists his son is no terrorist.

“My son is just a quiet, very nice Muslim,” he states, when asked whether Aman showed signs of a radical Islamist mentality. “I never, never had signs or symptoms. He’s simply a listener and follower type.”

My son has become a soccer ball between two teams -he’s in a bad, bad situation right now

Arrested in the north-eastern Pakistani city of Sargodha last December, the suspects were indicted on 17 March of conspiring to commit terror attacks on Pakistani soil, of funding banned jihadist groups, and of conspiring to wage war against a national ally of Pakistan, a reference to Afghanistan. They deny the charges.

An earlier police interrogation report alleged that the suspects, aged between 18 and 25, “were of the opinion that a jihad must be waged against the infidels” and that one of the accused, Ahmed Abdullah Minni, had received instructions via YouTube from a militant recruiter.

After the young Americans went missing, it emerged that one of them had left behind a video expressing radical views.

That is when their families contacted the US authorities. Later, when the families learned that their sons were staying in Sargodha, at the house of a relative of one of the group, they gave the location to the FBI.

“They thought that by going to the FBI, if their kids were in trouble the FBI could help,” explains Nina Ginsberg, an Alexandria-based lawyer representing the parents of the suspects.

“We would hope that when families have concerns, law enforcement is the appropriate place to go. In this case it was not.”

By disclosing what they knew, the parents hoped the FBI would facilitate the return of their sons to the United States. Even if that meant that they would face American justice. Instead, they now believe the FBI passed on the suspects’ location to the Pakistani police.

“We understood that the Pakistanis were unable to locate them, and could not even confirm that they had arrived in Pakistan,” says Ms Ginsberg. “And within a very short period of time after… the FBI knew where they were, they had been arrested.”

The FBI declined to comment on the case, or to respond to the specific claim that its agents passed on the suspects’ whereabouts to the Pakistani police.

A spokesman for the US Attorney’s Office for the eastern district of Virginia said prosecutors were still assessing whether a crime had been committed in the United States.

The trial of the Americans commenced behind closed doors last month, and is due to resume in Sargodha on 17 April. If convicted, the defendants could face life in prison, even though the Pakistani police have publicly played down the level of threat they posed.

Following the arrests in December, a Pakistani police source told US network ABC News the young men “didn’t know the meaning of jihad”.

The police interrogation report claims that in the city of Hyderabad they were turned away from a madrassa linked to Jaish-e-Mohammed, a group classified as a terrorist organisation by the US State Department.

Back in Virginia, families of the accused insist any evidence against them must have been fabricated or obtained through torture. “I believe that,” explains Hassan, “because when you see the history of Pakistan on human rights issues, it’s the worst place in terms of treating the prisoners.”

A spokesman for the US State Department, Andy Laine, told the BBC: “We take seriously all reports of torture, and did raise these reports with the government of Pakistan,” adding that US consular officials had visited the suspects nine times in jail.

By e-mail, a Pakistani police source said the allegations had been investigated and found to be “baseless”.

But families of the accused feel betrayed by the US authorities, who they allege have placed a higher value on co-operation with Pakistan than on assessing the facts of this case. “My son has become a soccer ball between two teams,” complains Hassan. “He’s in a bad, bad situation right now.”

There remains one obvious question for the father of Aman Hassan Yemer, the alleged teenage militant. If not for jihadist purposes, why does he think his son travelled secretly and without warning to the other side of the world?

“He sent a message through the State Department saying he was sorry – that he’d just left suddenly, without thinking,” replies Hassan. “He just followed. And I don’t know how they came up with the idea of this kind of charge.”

Ethiopian Simon Bahta Is On America Most Wanted

US Issues Warning For Travelers To Ethiopia

a sad news for familes

Thank you for your help!

Of course, what a great site and informative posts, I will add backlink – bookmark this site? Regards, Reader.

Maybe you should edit the page title Ethiopian American’s ‘quiet son’ on terrorism charges in Pakistan | Ethiopiaforums.com to more specific for your webpage you write. I liked the blog post all the same.