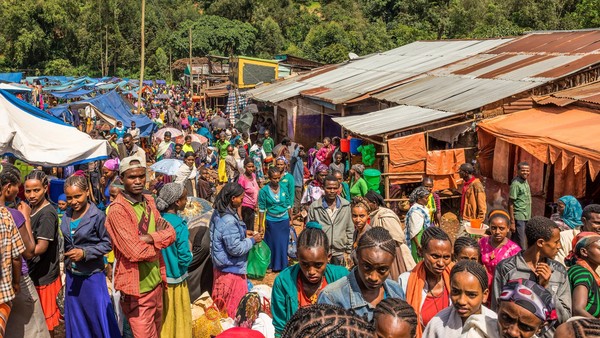 Ethiopia is likely to be one of the fastest growing markets for western exporters in the next five years, while erstwhile emerging market heavyweights Brazil and South Africa offer paltry growth.

Perhaps less surprisingly, China will continue to be the emerging market with the largest appetite for western imports, even if these fall well below the value of its exports, according to analysis by UniCredit, the Italian bank.

Ethiopia, alongside neighbouring Kenya, “are the two countries that provide the strongest opportunities in Africa, and they are catching up with South Africa,” says Fadi Hassan, assistant professor of economics at Trinity College, Dublin, and consultant for UniCredit.

“They are going to grow fast [economically], they do not rely on oil or other commodities, there is a rise in industrialisation and entrepreneurship that is quite remarkable and they are just past an income threshold where they start to import goods,” says Mr Hassan, who argues Ethiopia has the edge because of its greater political stability and lower crime levels.

The analysis by Mr Hassan and Marco Valli, chief eurozone economist at UniCredit, studied potential import growth for a dozen major EM countries based on factors such as projected growth in the size of their economies and working-age populations.

Importantly, the volume of imports in each country is not projected to rise merely in lockstep with the projected increase in consumer spending, but in some instances will rise much faster.

Mr Hassan and Mr Valli argue that demand for consumer goods can rise rapidly once a country reaches a certain level of development.

As the first chart shows, imports of furniture into Ethiopia were virtually flat in the decade to 2012 despite a near quadrupling of real gross domestic product per capita. However, once income per head rose above $450, furniture imports increased sharply. 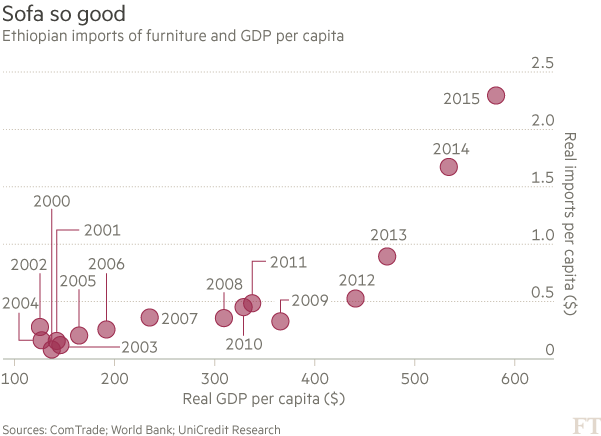 Poorer emerging market countries are forecast by the IMF to enjoy broadly faster rates of per capita GDP growth in the five years to 2021 than their wealthier peers, as the second chart shows.

“The IMF projections generally imply that the fastest growth rates will be recorded in low income EM economies where the catch-up potential is largest, such as India, the Philippines and Ethiopia,” says UniCredit. “In these three countries, per capita GDP (in dollar terms) is expected to grow by a cumulative 55-60 per cent over the next five years,” as the second chart shows. 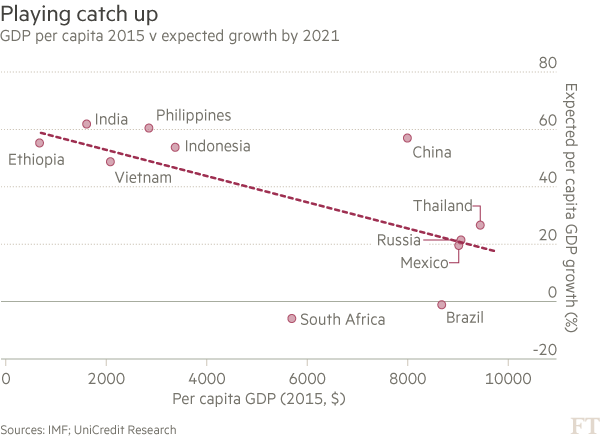 Assuming these growth expectations come to pass, the convergence process in the EM world “is likely to push a rising number of emerging countries towards income thresholds that increase the propensity of households and firms to demand imported goods”, says UniCredit.

In sharp contrast, income per head is projected to decline in both South Africa and Brazil in the next five years.

As a result, UniCredit forecasts that for the six sectors it analysed — cars, machinery, food, apparel, furniture and services — the dollar value of Brazil’s imports (in inflation-adjusted terms) will only rise by between 0 per cent and 7 per cent by 2021.

South Africa’s import growth is forecast to be almost as sluggish, rising between 2 per cent and 7 per cent, with the exception of apparel, where slightly healthier growth of 13 per cent is foreseen. Mr Hassan argues the country is caught in the middle-income trap, where it needs institutional improvements to kick on.

However, Ethiopia’s import markets, although far smaller in absolute terms, are tipped to expand much faster, by between 40 per cent and 90 per cent for the six sectors.

The situation is broadly similar for India, Indonesia, the Philippines, Thailand and Vietnam, whose imports are also forecast to rise rapidly in the next five years.

India is expected to see some particularly strong growth, albeit from a very low base. UniCredit sees its car imports rising 450 per cent by 2021, but this would still only result in car imports of $1.25bn, a fraction of the $100bn pencilled in for China (up from $59.7bn this year) and comfortably below far less populous Asian nations such as Indonesia and the Philippines.

Would-be exporters to India are plagued by a highly restrictive trade regime which means, for instance, just 2 per cent of the EU’s extra-EU merchandise exports, worth €38bn, went to India in 2015, despite the country accounting for 18 per cent of the world’s population.

The “Make in India” programme, launched last year by Narendra Modi, prime minister, and designed to encourage multinational companies to manufacture their products in India, is likely to further constrain the growth of Indian imports, as is the low level of income per head.

Mexico’s imports are forecast to edge up 10-15 per cent by 2021, although car sales are tipped to rise by a slightly faster 31 per cent to $12.4bn, maintaining the country’s status as the second-largest EM car importer after China.

Despite this, UniCredit argues Mexico offers opportunities for European exporters, which currently sell less than half as many goods to the country as their US rivals.

Projected import growth in Russia is somewhat stronger, but this largely reflects a modest bounceback from the decline in imports seen in recent years amid sanctions and a nasty recession.

UniCredit foresees a 51 per cent rise in Russian car imports to $9.8bn in 2021, for instance, but this would still be below the level seen in 2010.

As a result, with Indonesia, the Philippines, Thailand and Vietnam likely to be sucking in far higher imports in 2021, Mr Hassan says “the centre of gravity of trade” will shift towards east Asia, potentially playing into the hands of German exporters, which currently have the strongest penetration in the region.

Copyright The Financial Times Limited 2016. You may share using our article tools.

Please don’t cut articles from FT.com and redistribute by email or post to the web.