Ethiopian officials have dismissed fears that fraud and violence will hit the country’s election.

The opposition claimed the 2005 election was rigged in favour of Prime Minister Meles Zenawi.

But the government of Mr Meles, a US ally, vigorously denied those allegations.

Mr Meles is widely expected to be re-elected with the opposition seen as divided and disorganised. 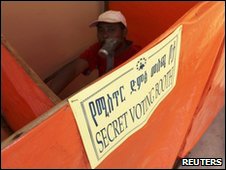 The BBC’s Will Ross in Addis Ababa says the reputation of Africa’s second most populous country is on the line following the events in 2005.

The head of the Electoral Board, Merga Bekana, says with an amended electoral law and adequate training, the problems of the last election will be averted.

“There is no way to cheat the results, so the results are very clear this time. We have learnt quite a lot,” he told the BBC.

There are thousands of local observers spread out across the country although some in the opposition do not see them as neutral.

There are some 60 opposition parties but eight of the largest have formed an alliance known as Medrek in the national Amharic language.

The Ethiopian government has banned foreign embassy staff from monitoring the poll – it does not see them as experts on elections and says it does not want diplomatic relations blurred.

The European Union has 170 observers on the ground – a relatively large number which our correspondent says shows how important the EU takes his event.

Some rights activists dismissed the elections as a charade months ago, saying the government had muzzled the media and was effectively blacklisting opposition supporters.