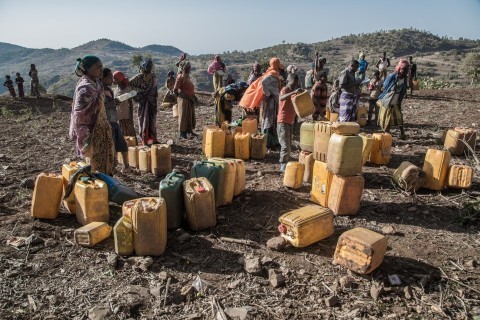 Ethiopians wait to fill water cans in February during the recent drought. With the return of the rains, however, have come flooding and disease — something the government is reluctant to discuss. (Aida Muluneh for The Washington Post)

ADDIS ABABA, ETHIOPIA — After going through its worst drought in 50 years, Ethiopia is again seeing rain. In fact, in some places, it’s falling too hard and has set off floods.

So while the number of people requiring food aid has dropped slightly from 10.2 million in January to 9.7 million, according to the latest figures, there is a new threat of disease in a population weakened by drought.

Measles, meningitis, malaria and scabies are on the rise. And most seriously, there has been an outbreak of something mysteriously called “AWD,” according to the Humanitarian Requirements Document, issued by the government and humanitarian agencies on Aug. 13.

“There is a high risk that AWD can spread to all regions with high speed as there is a frequent population movement between Addis Ababa and other regions,” it warned.

The letters stand for acute watery diarrhea. It is a potentially fatal condition caused by water infected with the vibrio cholera bacterium. Everywhere else in the world it is simply called cholera.

But not in Ethiopia, where international humanitarian organizations privately admit that they are only allowed to call it AWD and are not permitted to publish the number of people affected.

The government is apparently concerned about the international impact if news of a significant cholera outbreak were to get out, even though the disease is not unusual in East Africa.

This means that, hypothetically, when refugees from South Sudan with cholera flee across the border into Ethiopia, they suddenly have AWD instead.

[South Sudanese civilians fear the U.N. can’t protect them from a massacre]

In a similar manner, exactly one year ago, when aid organizations started sounding the alarm bells over the failed rains, government officials were divided over whether they would call it a drought and appeal for international aid.

Hundreds of protesters on Saturday clashed with police in Ethiopia’s capital Addis Ababa after campaigners called for nationwide protests due to what they say is an unfair distribution of wealth in the country. (Reuters)

The narrative for Ethiopia in 2015 was a successful nation with double-digit growth, and the government did not want to bring back memories of the 1980s drought that killed hundreds of thousands and left the country forever associated with famine.

“We don’t use the f-word,” explained an aid worker to me back in September, referring to famine.

Like many of its neighbors in the region, Ethiopia has some issues with freedom of expression and is very keen about how it is perceived abroad. While the country has many developmental successes to celebrate, its current sensitivity suggests it will be some time before this close U.S. ally resembles the democracy it has long claimed to be.

Ultimately, the government recognized there was a drought and made an international appeal for aid. The systems put into place over the years prevented the drought from turning into a humanitarian catastrophe — for which the country has earned praise from its international partners.

In the same manner, even though it doesn’t call it cholera, the government is still waging a vigorous campaign to educate people on how to avoid AWD, by boiling water and washing their hands.

Yet this sensitivity to bad news extends to the economic realm as well. Critics have often criticized Ethiopia’s decade of reported strong growth as being the product of cooked numbers. The government does seem to produce rosier figures than international institutions.

After the drought, the International Monetary Fund predicted in April that growth would drop from 10.2 percent in 2015 to just 4.5 percent in 2016.

Prime Minister Hailemariam Desalegn, maintained, however, that growth would be a robust 8.5 percent, despite the falling agriculture productivity and decreased export earnings.

In the political realm, news of unrest and protests is suppressed. During a weekend of demonstrations on Aug. 6 and 7, the Internet was cut, making it difficult to find out what happened.

Human rights organizations, opposition parties and media tried to piece together the toll from the deadly demonstrations, which according to Amnesty International may have been up to 100.

The United Nations has called for international observers to carry out an investigation in the affected regions, which the government has strongly rejected even as it has dismissed estimates of casualties without providing any of its own.

“That is one of the factors we are struggling against with this government, the blockade of information,” complained Beyene Petros, the chairman of a coalition of opposition parties. “Journalists cannot go and verify. We cannot do that.”

Local journalists are heavily constrained, and as Felix Horne of Human Rights Watch points out, Ethiopia is one of the biggest jailers of journalists on the continent.

“Limitations on independent media, jamming of television and radio signals, and recent blocking of social media all point to a government afraid to allow its citizens access to independent information,” he said.

Foreign journalists do not fare much better, especially if they attempt to venture out of the capital to do their reporting.

In March, the New York Times and Bloomberg correspondents were detained by police while trying to report on the disturbances in the Oromo Region.

They were sent back to Addis Ababa and held overnight in a local prison before being interrogated and released.

In a similar fashion, a television crew with American Public Broadcasting Service was detained on Aug. 8 south of the capital trying to do a story on the drought conditions.

They and their Ethiopian fixer — an accredited journalist in her own right — were released after 24 hours, and they were told not to do any reporting outside of Addis.

In both cases the journalists were all accredited by the Government Communication Affairs Office, with credentials that are supposed to extend the breadth of the country but in practice are widely ignored by local officials.

The government spokesman, Getachew Reda, has dismissed the allegations about the information crackdown in the country and in recent appearances on the Al Jazeera network he maintained that there are no obstacles to information in Ethiopia.

“This country is open for business, it’s open for the international community, people have every right to collect whatever information they want,” he said.

Ethiopia shuts down social media to keep from ‘distracting’ students

An oil boom made it the most expensive city in the world. Now it’s in crisis.