A row has erupted between Ethiopia and the government of Djibouti over the latter’s promulgation of a new directive, issued last week, that will see Ethiopia lose millions of dollars in port operations. 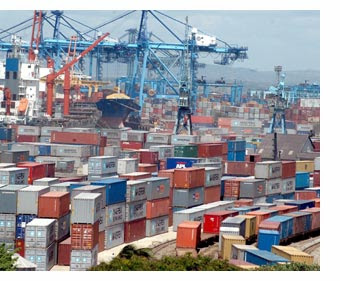 The directive establishes a monopoly, in favor of Maersk Djibouti Freight Station, over operations involving the stuffing and unstuffing of containers at the Djibouti port.

The operation, which was hitherto handled by all forwarding companies, could cost Ethiopia some 9 million dollars per year.

Under the agreement, Djibouti is expected to provide Ethiopia with a 60 day notification prior to price increments or actions that affect the port’s operations.

“It is a huge decision. We need to talk and want the case to remain pending in the meantime,” Mekonnen said ahead of a planned official visit to Djibouti, next week, to closely examine the issue with his Djibouti counterpart.

Ethiopian Freight Forwarders and Shipping Agents Association have also complained about the directive.

In a letter addressed to Aden Ahmed Dualeh, board chairman of Djibouti port authority, the association argues that third party handling in what concerns container stuffing and unstuffing operations could lead to a confusion over who should bear responsibility in case of damage, shortage or mixing of cargos.

In line with the directive, Maersk has already imposed a 100 dollar tariff per container that enters its premises for stuffing or unstuffing.

Dijiboti, Somalia, Kenya, Egypt, Yemaen all this country have got port but they are thives(serekti,leboch) all this country are maffias and so corapted. Sudan is much better. The Eritrean one is the most peaceful and clean nation not only in this reigion very feamous all over the world. In Eritrea don’t exist thives(seraki,leba). So It was so good to work for the Ethiopiens with Eritrean with respect and the low of civilaization, if it will be peace I hop and belive it will be.
Eritrawi!!!