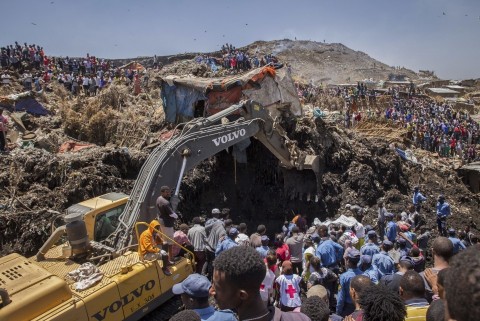 Rescuers work at the scene of a garbage landslide, on the outskirts of the capital Addis Ababa, in Ethiopia on Sunday (AP Photo/Mulugeta Ayene)

Three days of national mourning began Wednesday for the victims of a catastrophic landslide at the Ethiopian capital’s main garbage dump that left at least 113 bodies buried under a wall of trash and dirt, mostly women and children.

This year has not been kind to Ethiopia, including widespread popular unrest, drought in many parts of the country, a cholera outbreak and stampede at a culture festival. Yet the deaths at the Addis Ababa landfill on Saturday stands out as a sobering counterpoint to the country’s boasts of economic progress.

Ethiopia’s government for the last decade has tried to put behind the familiar cliches in Western minds of famine and poverty. The numbers help their case. Ethiopia has one of the best-performing economies in Africa. But 30 percent of Ethiopia’s population still lives below the poverty line.

The changes are especially apparent in Addis Ababa, which was once little more than an overgrown village with a few government buildings. The city is now sprouting with glass and metal skyscrapers ringed by affluent new neighborhoods catering to an emerging middle class.

But the landfill tragedy is a reminder that the slums and shantytowns are still there, too. One of them was built amid the artificial mountain of garbage, where people scrap out a living combing through the refuse. Late Saturday, they heard a roaring sound. The garbage mountain suddenly gave way, sweeping away makeshift homes and burying dozens.

The growth of the capital has often outstripped efforts to manage it, creating hazards like the half-century-old landfill of Reppi, also known as Koshe or dirt in Ethiopia’s Amharic language.

Located southwest of the city, just a 15-minute drive from the embassy-filled neighborhood of Old Airport that is also home to the city’s best international school, this mountain of trash is now surrounded by housing developments.

Here, hundreds of men, women and children known as “scratchers” comb through the daily trash deliveries from the rest of the city, squabbling over the highly prized refuse from the wealthier neighborhoods that yield the most valuable castoffs or the best food. Overhead birds circle the more than 70-acre site, waiting for their own turn on this artificial mountain of trash

Even before the latest collapse claimed dozens of lives, injuries and deaths from the settling trash or the bulldozers were common in this area, which is often a first port of arrival for immigrants from the countryside.

There was an attempt recently to close down the Koshe dump. But protesters from the surrounding Oromo region blocked garbage trucks heading for a new site.

In sharply worded statement Monday, Amnesty International held the government responsible for this “totally preventable disaster,” saying that the government was aware it was at full capacity but used it anyway and allowed people to build their huts on the garbage.

“These people, including many women and children, had no option but to live and work in such a hazardous environment because of the government’s failure to protect their right to adequate housing, and decent work.”

An estimated 300 people scavenge through the rubbish mountain at any given time and it is feared that the death toll could keep rising. The tally of dead rose sharply Wednesday from 72 to at least 113, an Addis Ababa official, Dagmawit Moges, told the Associated Press.

The government has announced the relocation of at least 300 people living on the site as well as compensation for the families. There have been scuffles though between residents and rescue workers, claiming they are not doing enough.

In the days since the landslide, there has been a heavy security presence at the site.

There has been no official reason for what caused the landslide, though the site’s overcapacity and the strain of accepting every day more garbage from the city’s estimated 3.5 million residents could be part of it.

Some residents have also claimed that the trash mountain was destabilized by a small foreign-funded biogas facility on the site to harvest methane gas and part of a years-long (and so far unsuccessful) effort to eventually close down the landfill — an accusation denied by the government.

Next to the festering, unstable landfill, that represents everything wrong with waste disposal across Africa and the developing world, is a project that could hopefully become a symbol of the continent’s future.

The $120 million Reppie Waste-to-Energy facility is expected to be completed some time this year and would process 85 percent of the city’s trash, turning it into enough electricity to cover 30 percent of the household power needs of the city.

The deal was announced in January 2013 with Cambridge Industries and construction started late in 2014. It is part of the country’s $150 billion Climate Resilient Green Economy project, with the stated of objective of turning Ethiopia into a middle-income economy by 2025 while keeping down greenhouse gas emissions.

The plant will only process fresh garbage, so while it would not do anything about the mountain of refuse nearby, it would prevent future ones from being created — and possibly future tragedies from happening.

The article has been updated to show that the size of the landfill is around 70 acres rather than 90 and the presence of a biogas project on the site that is distinct from the nearby waste-to-energy plant.