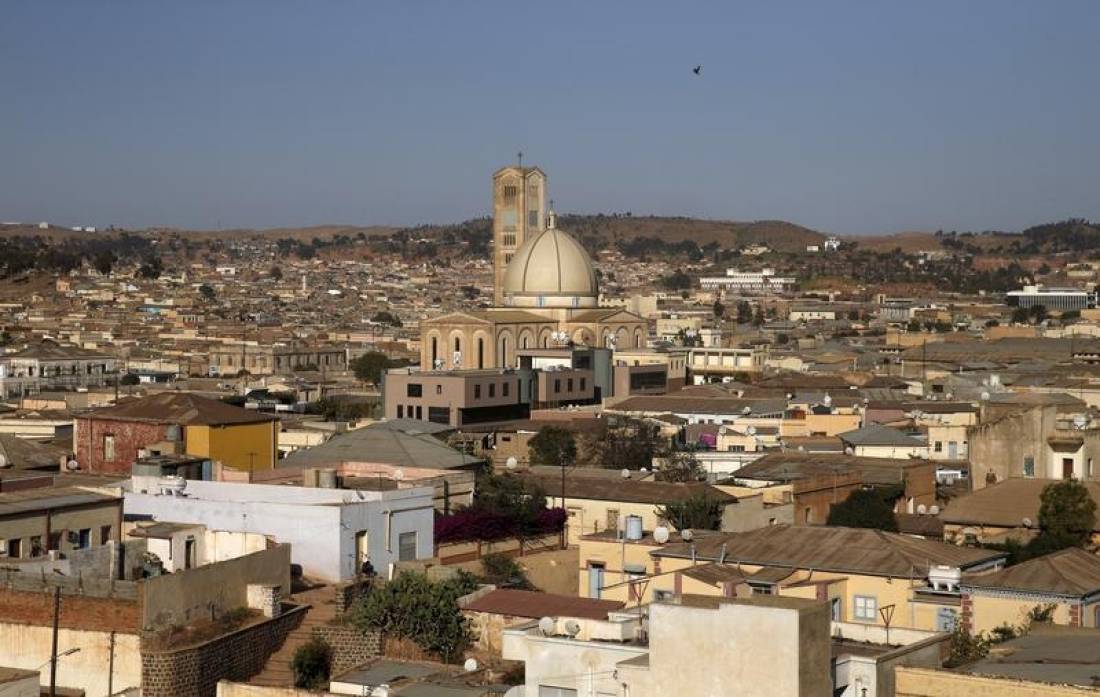 Eritrea won independence from Ethiopia in 1991, but tensions between the Horn of Africa nations persist

* Eritrea won independence from Ethiopia in 1991

ADDIS ABABA, June 13 (Reuters) – Eritrea and Ethiopia accused each other of starting clashes on Sunday between their soldiers in a border region, highlighting persistent tension over a boundary dispute that triggered war in 1998-2000.

Ethiopia said the situation was calm on Monday, after a resident on the Ethiopian side reported the sound of explosions all day on Sunday and lasting into the early morning of Monday.

Eritrea, a Horn of Africa country, won independence from Ethiopia in 1991. About 70,000 people were killed in the border war between the two countries.

Eritrea’s Information Ministry said in a statement late on Sunday night that the Ethiopian government had “unleashed an attack against Eritrea on the Tsorona Central Front.”

U.N. spokesman Stephane Dujarric told reporters in New York that Secretary-General Ban Ki-moon was concerned about the clashes and was reaching out to both sides.

“The secretary-general calls on both governments to exercise maximum restraint and work to resolving their differences through peaceful means, including the full implementation of the peace agreement they signed in 2000,” he said.

The United Nations in 2000 deployed a ceasefire monitoring force on the Eritrean-Ethiopian border but withdrew it in 2008 in response to restrictions imposed on it by Eritrea that the U.N. said at the time made it impossible for the mission to function.

Tsorona is a town south of the Eritrean capital Asmara and close to the frontier. The area saw intense fighting during the earlier border war.

“The purpose and ramifications of this attack are not clear,” the Eritrean statement said.

Ethiopia disputed this account, saying Eritrea started the fight. “Their forces were promptly repulsed. They were given a proper response,” government spokesman Getachew Reda said, adding that the situation was quiet on Monday.

Eritrea and Ethiopia routinely accuse each other of backing rebels trying to destabilise and topple the other’s government, a legacy from the earlier war.

A resident in the Ethiopian town of Zalambessa, across the border from Tsorona, told Reuters by telephone that he had heard the sound of shelling on Sunday and into the night.

“It did not stop until this morning around 9 a.m. (0600 GMT),” he said, asking not to be identified. He added that he had seen Ethiopian military vehicles and troops moving along the central stretch of the militarised border.

Eritrean Information Minister Yemane Ghebremeskel had no immediate additional comment when asked about casualties or other details of the attack. Ethiopian government officials also did not say if there were any casualties.

Charlotte King, senior Africa analyst at the Economist Intelligence Unit, said it was unusual for Eritrea to comment on flare-ups but said the statement may have been prompted by U.N. criticism Eritrea has faced over its prolonged national service.

Eritrea’s “critics will argue that it is trying to divert international attention away from the alleged crimes against humanity, and justifying its need for an enormous military and compulsory conscription,” King said in a brief commentary.

Eritrea, which is under U.N. sanctions, says world powers have failed to push Ethiopia to accept an international arbitration ruling demarcating the boundary. Ethiopia’s government has said it wants talks on implementation.