Private educators in Ethiopia have welcomed a grace period that allows them to demonstrate how they intend to comply with the government’s new education policy to increase student enrolment in science and technology courses.

Ethiopia’s Education Minister Demeke Mekonnen says it will make students more employable and service the country’s development aspirations: Improving the quality of education in the country is one of the goals of the country’s new five-year growth and transformation plan.

Ethiopia, one of the world’s poorest countries but also one of Africa’s fastest-growing economies, hopes to become a middle-income country by the year 2020.

But there has been a lot of confusion surrounding the ministry’s directive.

Local media reported in August that the education ministry had banned distance education.

It was reported that no new institutions, branches or courses could be started, they had also been instructed not to carry any advertisements for enrolment in private institutions.

The directive also stopped private institutions from offering teaching and law courses. In both instances, the reason given by the ministry of education was poor quality.

Critics of the government claim that the directives are intended to drive students to public institutions where they will be trained to think along government lines and become members of the governing coalition, the Ethiopian People’s Revolutionary Democratic Front (EPRDF).

Distance learning is preferred by some who live in remote areas

He says private institutions are needed in Ethiopia to cope with the growing numbers of secondary school leavers.

“Equitable approach is our fundamental principle and practice, addressing and narrowing the gap between the males and the girls and addressing the marginalised areas like the pastoralists, that is our main, main task,” he says.

“For this social group, addressing quality education, whether they are members of the EPRDF or not, that is the issue of every citizen.

Mr Demeke also says there is no ban on distance education, all that happened was a halt to new admissions for quality assessments.

The training of teachers in private institutions is poor, he adds. 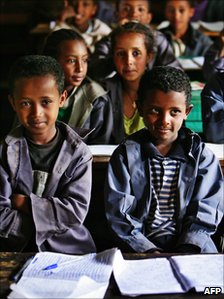 “When the education sector and the whole system evaluated school performance at different levels, those teachers coming from the private sector did not know about pedagogy and basic principles of teaching,” he says.

Distance learning is the preferred alternative for Ethiopia’s adult students, most of those who work and cannot attend classes or live in remote areas with no access to higher education.

Mr Demeke did not say how long the review of distance education providers would take.

Students interested in tertiary education would have access to regular or face-to-face courses in both public and private institutions, he said.

Ethiopia is one of the few African countries on track to meet the United Nations Millennium Development Goal of providing universal access to primary education.

New schools have been built and there are no fees for primary and secondary schooling. Enrolment has jumped as a result.

But over a decade ago, there were hardly any colleges or universities, so private institutions stepped in to fill the gap.

Ethiopia has about 65 degree-offering private institutions, with about 55,000 students.

In contrast, there are more than 20 public universities in the country with close to 300,000 students enrolled.

None of the officials at the private institutions I approached would speak to me on the record about the education ministry’s directive.

They all said the issue was too sensitive and they did not want to jeopardise their negotiations with the government.

However, their complaints about not being given any transition period resulted in the government’s new directive, they said.

Institutions that provide only distance education can apply to switch to face-to-face learning; they must also provide a business plan within six months expressing a commitment to enrol 70% of their new students in science and technology courses and 30% in social sciences.

New institutions, branches and programmes can also open as long as they also provide a business plan and show that they will adopt the 70:30 enrolment ratio in favour of science and technology courses over two years.

But this grace period raises even more questions for private institutions: Where will they find qualified science and technology instructors with two degrees or more? How can they afford to import the laboratory equipment and machinery needed for science courses?

I asked a few job-seeking Ethiopians for their views on the directives on education.

Some welcomed the ministry’s intervention “to ensure the quality of education in all areas”.

Another told me that “the advantages outweigh the disadvantages” because the risk of plagiarism was higher in distance education.

The sole dissenting voice told me it was a bad decision that stopped people from “improving their lives”.

who save us now?
thanks to God!