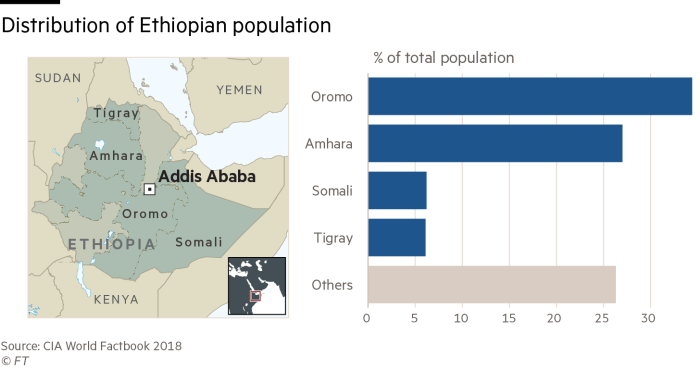 David Pilling in London and John Aglionby in Nairobi


It is not every day a prime minister admits that his country is in chaos, that the leadership is tainted by corruption and that the government has abused the legitimate rights of its people. Yet after years of popular uprisings and state repression, that is exactly what Abiy Ahmed, Ethiopia’s new 41-year-old leader, has done.

“In a democratic system, the government allows citizens to express their ideas freely without fear,” Mr Abiy said this month, addressing a parliament that has overseen two states of emergency since 2016 and locked up or shot thousands for voicing their opinion.

Asking for forgiveness from “advocates of freedom and justice” killed in police crackdowns, he used his inaugural speech to chart “a new political beginning”. For the east African country of 105m people, the continent’s second-most populous, he said building a system that “respected all human and democratic rights, especially to free expression, assembly and organisation” was “an existential matter”.

His handling of that process may prove an existential matter too — at least for the 27-year-old Ethiopian People’s Revolutionary Democratic Front, the coalition that has monopolised power since it overthrew the Marxist Derg regime in 1991. Lauded internationally for overseeing some of the fastest growth in Africa, at home it has struggled to contain never-ending waves of protest.

Resentment has been stirred by the widespread belief that the government is controlled by Tigrayans, who make up only 6 per cent of the population. Demonstrations have been particularly intense among the Oromo, who account for one in every three Ethiopians, but who have felt politically and economically marginalised. Mr Abiy is the first Oromo to hold the premiership since the post was created in 1909.

“His inaugural speech gave everyone hope,” said Awol Allo, an Ethiopian law lecturer at Keele University in the UK. “Even the fiercest [government] critic could say, ‘Hold on, maybe there’s something here for me’.”

Asfa-Wossen Asserate, the great nephew of Haile Selassie, Ethiopia’s last emperor, put it more bluntly. “This is the last chance for Ethiopia,” he said. “If the Tigrayans don’t give this young man a chance to deliver, I’m afraid there is no more hope for peaceful transition. We will have a civil war.”

The man on whose shoulders so much expectation now rests was once a guerrilla fighter against the regime of Mengistu Haile Mariam. He went on to become a lieutenant-colonel in the army. A student of computer engineering with a masters degree in leadership from the UK’s Greenwich University, he received his PhD in 2017 from the University of Addis Ababa for a thesis on social capital and conflict resolution. He was elected to parliament in 2010.

“People who work with him say he is transformational, inspirational,” said Hassen Hussein, an Ethiopian writer and assistant professor at Saint Mary’s University of Minnesota.

Impressive credentials aside, Mr Abiy became prime minister almost by accident. When his predecessor resigned abruptly in February in a sign that the crisis was coming to a head, the natural successor might have been Lemma Megersa, the popular president of Oromia and a man seen as capable of calming the Oromo rebellion. But Mr Lemma was not an MP and the job fell instead to the lesser-known Mr Abiy.

Mr Abiy’s task, say analysts, is to open up more political space and spread wealth more equitably. Despite several years of growth officially recorded at 8-10 per cent, the EPRDF has struggled to find opportunity for a population that has doubled since it took power and whose aspirations have soared.

The EPRDF’s industrial and agro-processing push has run into land issues, provoking bitter protests with those who have been dispossessed. Land issues too triggered the 2015 protests after plans to expand Addis Ababa into surrounding Oromia state. More recently, there have been fierce clashes between people from the Oromo and Somali regions, causing up to a million internally displaced migrants.

Mr Abiy began the process this month of reconciliation by hosting a dinner for members of the opposition recently released from prison. “If he takes the right kind of steps to address the problems, he will continue to have the broad support of the people,” said Mr Awol. “But if he mis-steps or hesitates, the protesters will return to the streets.”

Satisfying the contradictory demands of the ruling coalition may be equally tricky. From its point of view, Mr Abiy’s role, say analysts, is to open the political system just enough to quell protests but not so much that it loses control.

“The EPRDF is scared of its own shadow,” said Tsedale Lemma, who edits the Addis Standard magazine from exile in Germany.

Much of the coalition holds Mr Abiy in deep suspicion and bitterly fought his elevation to the premiership, Ms Lemma said. For many people, she said, the young Oromo prime minister is seen as the last chance to stave off political breakdown.

Mr Hassen, the writer, said he was desperate for Mr Abiy to succeed. “If he doesn’t, I think it will be a disaster and we could see state collapse,” he said. “Something like Syria.”