The 48-year-old journalist and psychologist has often used hunger strikes, putting his own health at risk, as a means of protest to achieve greater freedoms in the Communist island of Cuba.

Mr Farinas is the third Cuban to receive the prize, after Oswaldo Paya in 2002 and the “Ladies in White” group of women whose husbands are jailed in Cuba, which received the award in 2005.

Jerzy Buzek, the European parliament president, will officially announce Farinas as the winner of the Sakharov Prize later Thursday. The award will be presented to the winner on December 15. 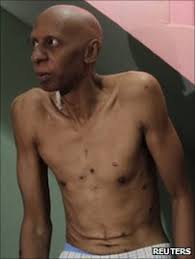 Birtukan Mideksa, the Ethiopian opposition leader, and Israeli rights group Breaking the Silence had also been on the shortlist for this year’s award.

The decision to give this year’s award to Farinas came four days before European Union foreign ministers meet in Luxembourg to discuss the 27-nation bloc’s relations with Cuba.

Mr Farinas held a 135-day hunger strike earlier this year that left him near death but compelled the Cuban government to agree to release 52 political prisoners.

Another fast between 1995 and 1997 brought attention to his allegations of corruption at the hospital where he worked.

He also carried out a six-month hunger strike in 2006, but that time he failed to force the government to allow freer access to the internet.