Internet addresses written in Arabic were live on the Internet on Thursday, making history as the first online domains in non-Latin characters.

“For the first time in the history of the Internet, non-Latin characters are being used for top-level domains,” the Internet Corporation for Assigned Names and Numbers (ICANN) said in an online message. 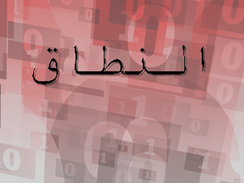 “Arabic has now become the first non-Latin script to be used as an Internet domain name.”

Top-level domain names serve as sort of a postal code for online addresses, with widely known examples including .com, .org, and .net.

“All three are Arabic script domains, and will enable domain names written fully right-to-left,” Kim Davies of ICANN said in a blog post.

“Expect more as we continue to process other applications.”

Languages with native domain script names in the final stages of the approval process include Chinese, Sinhalese, Tamil, and Thai, according to ICANN.

Websites with online addresses in Arabic are available in Egypt, Saudi Arabia and the United Arab Emirates.

“Arabic is among the most highly used languages on the Internet today,” ICANN said.

“Users in the (Middle East) will now have easier access to the Internet, with the ability to use their primary language for the entire domain name.”

It is up to countries with new top-level domains to launch them in ways that give people day-to-day use, according to Davies.

As of Thursday, ICANN had received requests for 21 domain names in a mix of 11 languages.

In October, ICANN approved a new multilingual address system which it said would open up the Internet to millions more people worldwide.

In the future it will be possible to write an entire website address in any of the world’s language scripts.

ICANN chairman Peter Dengate Thrush has described the new measure as the biggest technical change to the Internet for 40 years.

ICANN says more than half the world’s 1.6 billion Internet users use languages with scripts that are not Latin-based.

ICANN, a non-profit body formed in 1998 by the US government, was last year given more autonomy after Washington relaxed its control over how the Internet is run.

What could go wrong with this?