Africa is witnessing the birth of a new ocean, according to scientists at the Royal Society.

Geologists working in the remote Afar region of Ethiopia say the ocean will eventually split the African continent in two, though it will take about 10 million years.

Lead researcher Tim Wright who is presenting the research at the Royal Society’s Summer Exhibition, described the events as “truly incredible”.

Used to understanding changes in the planet on timescales of millions of years, the international team of scientists including Dr Wright have seen amazing changes in Afar in the past five years, where the continent is cracking open, quite literally underneath their feet. 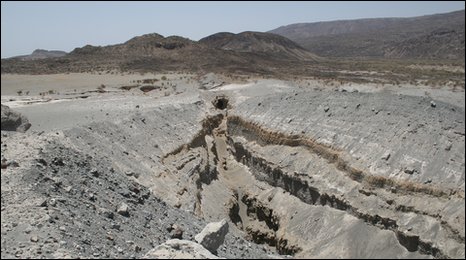 In 2005, a 60km long stretch of the earth opened up to a width of eight metres over a period of just ten days.

Hot, molten rock from deep within the Earth is trickling to the surface and creating the split.

Underground eruptions are still continuing and, ultimately, the horn of Africa will fall away and a new ocean will form.

Dr James Hammond, a seismologist from the University of Bristol – who has been working in Afar – says that parts of the region are below sea level and the ocean is only cut off by about a 20-metre block of land in Eritrea.

“Eventually this will drift apart,” he told the BBC World Service. “The sea will flood in and will start to create this new ocean.

“It will pull apart, sink down deeper and deeper and eventually… parts of southern Ethiopia, Somalia will drift off, create a new island, and we’ll have a smaller Africa and a very big island that floats out into the Indian Ocean.”

The researchers say that they are extremely lucky to be able to witness the birth of this ocean as the process is normally hidden beneath the seas.

The team hope to conduct experiments in the area that will help understand how the surface of the Earth is shaped.

They believe that the information they glean from observing the shaping of the Earth will help scientists better understand natural hazards such as earthquakes and volcanic eruptions.

Who owns the Nile’s water?

You are tooo late nature, Meles already split the country in so many places hahaha.

after that we may get port of our own