A man accused murder his wife sought help from priest

Three weeks before police charged him in the stabbing death of his wife, Tamrat Gebere went to church.

He visited the St. Tekle Haimanot Ethiopian Orthodox Church on Merivale Rd., one of several Christian churches serving Ottawa’s Ethiopian community of about 5,000, asking if the priest there, Melak Genet Senay, would baptize his 18-month-old daughter.

“There is only one problem,” Gebere told Senay, as the priest recounted through a translator on Monday.

“My wife has taken my daughter and run away with her.” 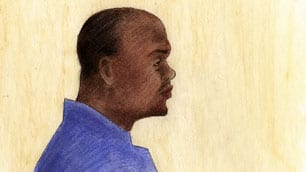 Sketch image of a murder charged of his wife Tamirat Gebere

Gebere provided the priest with a phone number where he could reach his wife, identified in court as Aster Kassa.

Gebere, 35, was arrested in a seventh-floor apartment at 1541 Riverside Dr., where his wife’s body was found, after she had apparently moved out of an apartment she shared with Gebere and their 18-month-old daughter at 415 MacLaren St.

The girl is now being cared for by the Children’s Aid Society.

Although the couple were not members of the congregation, Senay agreed to help.

“I was trying to bring them together,” Senay said.

“It is my responsibility to bring you together to resolve your differences,” Senay told Gebere. “Then you will come as one into the church and I will baptize your daughter before God.”

When he received no response from the woman, Senay said Gebere became upset when contacted on the phone.

“I tried to calm him down,” said the priest. “I told him not to be upset, that time will resolve it. I told him to understand that we live in North America, and that in Canada the rule of law is supreme.”

He heard nothing more until Sunday, when he read about the tragic outcome of the apparent domestic dispute in the newspaper, and shared the news with his congregation.

“They were completely shocked, because this is a new phenomenon for us. We are a peace-loving community who live in the fear of God,” said Senay.

Semaneh Jemere, chair of the Ethiopian Community Association, said the incident has left the community “shocked and devastated.”

Jemere didn’t know the family, but contacted police to provide any assistance he could.

Const. Kathy Larouche said that “due to the domestic nature” of the crime, police will not comment further until Tuesday at the earliest, when autopsy results are expected.

Jemere said that according to information he had received from those who knew him, Gebere left Ethiopia 20 years ago and spent nearly a decade in a Kenyan refugee camp before making his way to Ottawa, where he studied at the University of Ottawa, but struggled to find permanent work until he was recently hired into the civil service by Citizenship and Immigration Canada.

He said police were working on contacting the woman’s sister in Ethiopia to break the news in accordance with Ethiopian culture and tradition.

Jemere said Gebere brought his wife to Ottawa from Toronto, but the couple had “no major contact” with the Ethiopian community here.

“We wish we had known them,” said Jemere. “We could have helped them in our traditional way of marriage counselling.”

What is wrong with the Ethiopian Immigrants?

I am in a sad mood since I heared the news, Asni was a competent & nice women May her soul R.I.P

They say money is the source of ALL evil. In this case, the guy killed her because he is not able to pay the monthly child support. He is an immigrant, which means he is not able to get a good paying job that a Canadian born/raised in Canada can get. That is the price one pays when a person leaves his native country (in this case Ethiopia). Because the American/Canadian system is too hard, it is too stressful for an Ethiopian to live outside of Ethiopia. That is why many of them are depressed and sad all the time. You lose a lot by leaving Ethiopia, in the case of this story, he lost his freedom and she lost her life. Had they never left Ethiopia and just fended for themselves doing any job, they would both be better off. It is ok to spend some time outside of Ethiopia for the purpose of acquiring knowledge (I would say not more than 10 years) and a little bit of money, then just go back to Ethiopia and apply that knowledge and build a small business. That’s what most people from other countries do, China, Nigeria, Gabon, Uganda, etc. Ethiopians seem to be the only stubborn ones who signed up for voluntary slavery.