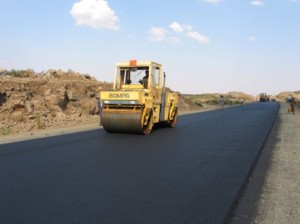 Photo by the Ethiopian Government: Construction of the Gondar-Debark road underway in Amhara.
Hibret Insurance has been sued by the Ethiopian Road Authority (ERA) in a non-performance case worth 84 million ETB (Ethiopian Birr).
The case is reportedly being instituted by the ERA against Hibret Insurance because it was the pre-payment guarantor to the contractor in an agreement between ERA and Tibeb Construction for the development of the road in Amhara regional state.
Reports indicate that only 52 million ETB was paid to the authority after negotiations.
Sources say ERA decided to take the project from Tibeb Construction for non- performance, and since the pre-payment guarantee payment has not been completely received, the insurance company was notified.
Although the pre-payment insurance contract amounted to about 100 million ETB, about 12 million was reportedly subtracted for the work already accomplished by the contractor and for other payments, therefore the authority has asked for 84 million ETB.
Hibret Insurance, after calling for negotiations with the ERA, has paid 52 million ETB to the authority, stating that this is the amount it is supposed to pay.
Meanwhile, ERA officials have expressed disagreement and called for new negotiations with the Ethiopian-owned loan and Insurance outfit, to clarify why 22 million ETB have been deducted from the payment.
The case has been adjourned until April 3rd, 2014.