All three Ethiopian Athletes who compete in this distance Qualified to Advance to the second round. Athlete Sofiya Assefa and Athlete Hiwot Ayalew finish their heat by winning the race Athlete Etenesh Diro finished second on her group.

Hiwot Ayalew of
Ethiopia
and Antje Moldner-Schmidt of Germany compete in the Women's 3000m Steeplechase Round 1 Heats on Day 8 of the
London 2012 Olympic Games
at Olympic Stadium on August 4, 2012 in London, England.

(L-R) Sofia Assefa of
Ethiopia
and Emma Coburn of the United States competes in the Women's 3000m Steeplechase Round 1 Heatson Day 8 of the
London 2012 Olympic Games
at Olympic Stadium on August 4, 2012 in London, England.
Top

When Yanet Seyoum took to the water for her Olympics 50m freestyle heat, it was a fair bet that most of her fellow competitors would not have endured a training regime of avoiding doggy-paddling tourists in a hotel swimming pool, or relied mainly on written instructions from a coach who lives in another city.

Seyoum - the first swimmer from Ethoipia to ever make it to the Olympics - came last in her heat and failed to make it to the semi-final. Her finishing time was a personal best of 32:41, a whole 2:40 slower than the heat winner Karin Clashing O'Reilly of Antigua and Barbuda and nearly eight seconds behind the fastest qualifier, the Netherlands' Ranomi Kromowidjojo. 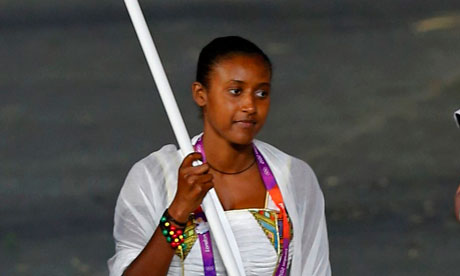 But the 18-year-old, a lone swimmer in a country famed for its long distance runners, has high hopes for the future.

"I would like to see professional swimmers in my country," Seyoum said, speaking before the Olympics among the guests and leisure swimmers around the pool of the Ghion hotel, a popular hangout for Addis Ababa's middle classes. "But this requires swimming clubs."

Ethiopia has won 38 Olympics medals, 18 of them gold, since the 1956 Games, every one of them in running events of 3,000m or longer. When you look at the country's swimming infrastructure it is not hard to see why the sport has not featured. The Ghion's pool, Olympic size but often cold and sometimes busy, is Seyoum's best option for training.

Her coach lives in Nazret, a city about an hour by bus from the capital, a trip Seyoum takes irregularly for instruction. And in the meantime? "Oh, no problem, everything is written here," she said, flipping through a written training programme the coach sends every week.

Given the conditions it is little surprise that Seyoum's personal best for the 50m freestyle before London 2012 was 33.17 seconds, very nearly 10 seconds longer than the world record of Germany's Britta Steffen, the reigning Olympic champion. Before Friday's competition she was also some distance from the 25.27 second official Olympic qualifying time for the event, but was among around 150 swimmers granted special dispensation to compete by Fina, the sport's governing body.

But Seyoum is not another Eric "the Eel" Moussambani, the Equatorial Guinea swimmer who took almost two minutes to complete his 100m freestyle heat at the 2000 Sydney Games. The Ethiopian teenager competed at last year's swimming world championships, recording a faster time than 14 other competitors.

While Seyoum trained intensely for the Olympics – "I have been dreaming of this since I was a child" – she was realistic about her likely future occupation.

The English-speaking product of Ethiopia's middle classes – her father is a driver for an aid agency while her mother works for EthioTelecom – Seyoum is simultaneously taking an engineering degree at Addis Ababa Science and Technology University, a situation that put her training under strain. Just before the Olympics she was forced to cut her training back from seven days a week to five, in order to prepare for her end of year exams. She regularly worked until 1am, slept for five hours before going to university in the morning and the pool in the afternoon. "The most challenging thing is to combine my first year of engineering study and my training," she said. Seyoun learned to swim at the age of 12, taught by her father at a pool in Kombolcha in the north of Ethiopia, best known to outsiders as a UN base during the 1985 Ethiopian famine. "One day I participated in a swimming competition, for fun, and I won the silver medal. It's how everything started," she said.

Her unique status has already brought a measure of celebrity. In May, Seyoum helped at the ceremony to raise the Olympic flag at the British embassy in Addis Ababa. She will be among three Olympic hopefuls profiled in a British-made film due to air soon on Ethiopian TV. The other two, of course, are runners.

Despite coming last in her heat, Seyoum will return home a champion. The news of her failure to qualify was posted on the website Ethio Sports. Soon after, one reader had thanked her for representing the country. Another, identifying themselves as Ken, was sure that it wouldn't be her last Olympic performance. "We are very proud of you to represent our beloved country for the first time (Swimming) in Olympic," he wrote. "I am sure you going to reward us with gold the year 2016. Thank you Yanet.

Long-distance specialists Ethiopia are confident of repeating their successes of four years ago
as they once again go for gold in the 5,000 and 10,000 metre events. AFP
[youtube]http://www.youtube.com/watch?v=_P3CPtaZ7Ns[/youtube]
Top

Including Kenenisa Bekele and his brother Tariku Bekele couldn't get us a Gold as we all hoped but they couldn't catch up with Somlaian born British athlete Mohamed Farah.Mohamed Farah took the Gold for Britain and the unexpected US athlete Glen Rupp took the silver Ethiopian Tariku Bekele took Bronze at the the 3rd place. The most anticipated Kenenisa bekele finished the race at 4th place.

Including Kenenisa Bekele and his brother Tariku Bekele couldn't get us a Gold as we all hoped but they couldn't catch up with Somlaian born British athlete Mohamed Farah.Mohamed Farah took the Gold for Britain and the unexpected US athlete Glen Rupp took the silver Ethiopian Tariku Bekele took Bronze at the the 3rd place. Kenenisa bekele finished the race at 4th place while Athlete Gebregziabher Gebremariam finished at the 8th place.

LONDON (AP) - Tiki Gelana of Ethiopia won the women's Olympic marathon in a race that began in heavy rain, saw the sun briefly come out and ended in another downpour.

There were four runners in a bunched pack over the last three miles. But with the finish line ahead, Gelana made her move, grimacing as she surged to the front. With the rain falling, she kept glancing over her shoulder to see if Jeptoo was gaining ground.

Gelana coasted in and raised her hands as she crossed the line, soaking in the moment. The other Ethiopian athlete Mare Dibaba finished the race at 23rd place.

Shalane Flanagan was the top U.S. finisher in 10th place

Gold medalist Ethiopia's Tiki Gelana celebrates with the Ethiopian flag after winning the finish line of the women's marathon at the
London 2012 Olympic Games, on August 5, 2012.

Athlete Mekonnen GEBREMEDHINof Ethiopia finished his 1500 meters semifinal at 3rd place and qualified to advance to the Final race that will take place August Tuesday 07.

With another controlled, confident run, Asbel Kiprop’s quest to follow in the footsteps of Sebastian Coe continued in the semi-finals of the men’s 1500m before another capacity crowd of 80,000 at Olympic Stadium.

Kiprop, the Beijing winner four years ago and this season’s world leader, is hoping to emulate Coe, the LOCOG Chairman, who won back-to-back metric mile titles in 1980 and 1984. With the first five from each of the two semi-final races moving on automatically into Tuesday night’s final, the Kenyan advanced easily after his second place finish in the first heat.

Apparently preferring a sluggish, tactical race Kiprop controlled the proceedings from the outset. The lanky Kenyan moved to the front at the gun, leading the field through opening laps 63.73 and 63.47. By the time he brought the field through 1200m with a 55.96 third lap, gears were already shifting behind him as the followers jockeyed for position.

As he did in the opening round, 24-year-old Algerian Taoufik Makhloufi sped ahead and into the lead to win the heat in 3:42.24. After the race he was seen being assisted off the track and hobbling slightly.

Kiprop (3:42.92) was next, although nearly inseparable from Mekonnen Gebremehdin of Ethiopia and American Leo Manzano who were each just 0.01 ahead of the next, respectively. Henrik Ingebrigtsen, Norway’s 21-year-old European champion, closed fast to nab the final qualifying spot.

"I felt really good," Kiprop said. "I was excited, although it was a slow race and I prayed that I would finish well. I was controlling the race but I was surprised that the rest of the field could kick hard in the end."

Silas Kiplagat and Nixon Chepseba finished second and fourth, respectively, in the second and faster heat, keeping Kenyan hopes of a podium sweep – the first in 108 years - alive.

Chepseba, who advanced from the first round after a protest by the Kenyan team, avoided any trouble tonight by taking the lead and maintaining for more than 1200 metres. He was first passed by Abdalaati Iguider of Morocco who sped away to win comfortably in 3:33.99, with Kiplagat closing fast to take second in 3:34.60. Nic Willis, the 2008 silver medallist, closed well with a relaxed 3:34.70 for third ahead of Chepseba (3:34.89).

"I’m going to be running against very experienced guys in the final," Chepseba said. For the Kenyan athletes, teamwork is going to be what works."