by selam sew
- Oromo, Amhara ethnic groups in conflict over land in one area
- Opposition says over 40 dead in three weeks of Oromo protests 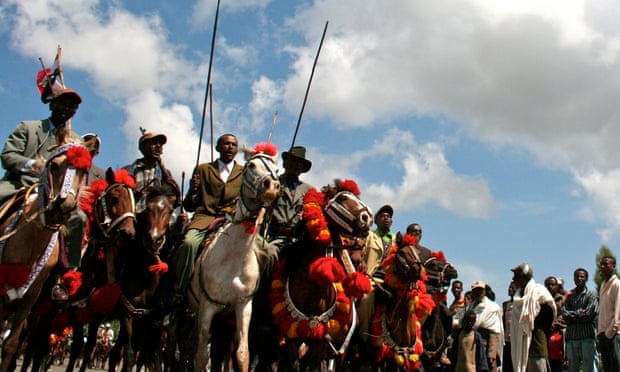 
Protests by Ethiopia’s largest community against a plan to integrate the capital, Addis Ababa, with surrounding towns have spiraled into fatal clashes between ethnic groups over land in one district, the Ethiopian Human Rights Council said.
Conflict between Oromo and Amhara people in Ameya Woreda of Oromia state flared on Dec. 12 after three weeks of protest across the region over the Addis Ababa plan, according to Betsate Terefe, executive director of the Addis Ababa-based group.
“Real ethnic conflict broke out and is under way,” he said in an e-mailed statement on Sunday. “Many houses burned, people killed and wounded.”
Ethiopia is a multi-ethnic federation whose constitution gives groups the right to self-government and protects their language and culture. Oromo protesters say the plan for the capital will lead to a further loss of autonomy and marginalization for Oromo living on the outskirts of the capital. The government says integrated development will benefit everyone.
Security forces mostly left Ameya when they faced resistance after fatally shooting an Oromo farmer on Sunday, said Tesfaye Hirtasa, who’s visiting his family in the district.

Five people have died in the ethnic clashes, more than 10 properties have been razed and families are fleeing the fighting, he said by phone on Monday. “Everybody is full of fear, no one has security. Those who have armaments are protecting their house from any attack. Others are moving in the forest, others are taking their property to other places,” Tesfaye said. “Things are not stable, we are totally in danger.”
The situation in Ameya is because government agents incited ethnic violence to distract from the Oromo protest movement, said Bekele Gerba, the deputy leader of the opposition Oromo Federalist Congress. More than 40 people have been killed by security forces during three weeks of protests, including over the last three days in the West Shewa zone that contains Ameya district, he said by phone from Addis Ababa on Monday.
Communications Minister Getachew Reda said a minimum of five people have died during the demonstrations, which he said started off largely peaceful and have degenerated into extremist Oromo groups trying to incite further unrest by attacking Amhara, officials, factories and government installations.
“The security forces will be taking very responsible and measured steps to neutralize the armed gangs which are now terrorizing the people in the region in those localities,” he said by phone from the capital on Monday.