Ethiopian bassist Thomas 'TommyT' Gobena is man of the world

Ethiopian bassist Thomas 'TommyT' Gobena is man of the world 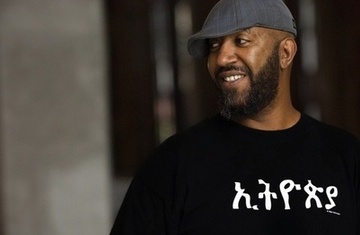 It's breakfast time at Dukem, the popular Ethiopian restaurant on U Street NW, but Thomas "Tommy T" Gobena orders lunch. In a city of red-eyed, Cinnabon-scarfing frequent fliers, he might be the most jet-lagged man in Washington.

Gobena lives in Alexandria but will spend most of this new year in the air and on the road, playing bass for Gogol Bordello, a merry band of self-branded "Gypsy punks" scheduled to hit about 200 stages across the globe in 2010. Days earlier, Gobena was wowing a crowd of 20,000 in Mexico City. In a few days, he'll be at it again in St. Petersburg, Russia.

With a hyper-kinetic live show that's part ramshackle cabaret, part rock-and-roll exorcism and part culture-mashing swirl, Gogol Bordello seems to translate loud and clear on almost every corner of the planet. For the band on tour, border crossing becomes both a musical and literal pursuit.

"I'm not really a loud person," Gobena says, sipping cinnamon tea at Dukem. "But I can say this about the band. . . . You don't have to be huge fan. You don't have to buy the CD and follow us everywhere. But if you come to the show you won't go back."

Gogol Bordello performs at Washington's 9:30 club Saturday and Sunday, and is fronted by the irrepressible Eugene Hütz-- a sort of Ukrainian Iggy Pop whose good looks and wild-style charisma have earned him Hollywood film roles and collaborations with Madonna. The band is based in New York but its members hail from Israel, Scotland, Russia, Ecuador, the United States -- and in the case of Gobena, Ethiopia by way of Northern Virginia. Towering of frame and deep of voice, Gobena, 38, plays his instrument accordingly, with bass lines that run large and low. Since joining the group in 2006, he says he feels perfectly at home in the band's chaotic clatter.

"I've always thought about music without boundaries," Gobena says. "With Gogol Bordello, we go from one part of the world to another part of the world. And listening to so many different kinds of music, your entire philosophy is confirmed."
ad_icon

Gobena's musical worldview first took shape in the nightclubs and restaurants of Adams Morgan, where he got his start performing for Washington's Ethiopian diaspora and music-savvy locals. In 1987, at age 16, he'd trekked from Addis Ababa to Alexandria, to move in with his older brother Henock Temesgen, a civil engineer by trade, a "beast of a bass player" by night.

Gobena remembers breezing through his classes at T.C. Williams High School and acclimating to American culture with ease. "I was a Redskins fan three weeks after I got here," he says. "Before that I had never seen American football in my life."

Temesgen played in the local group Admas and soon Gobena was following his big brother's lead, gigging regularly with his own group, Adola. The crew of friends would later morph into the Abyssinian Roots Collective, and still performs today. "We played at every restaurant in Adams Morgan you can think of," Gobena says.

After scoring his diploma, Gobena headed off to Saginaw Valley State University in Michigan to earn a degree in computer science, but would come home on breaks -- even three-day weekends -- just to play with Adola. He returned to Washington immediately after graduation to attempt an ill-fated balancing act between work and music.

"I hated my day job," he says. "You're a young man coming out of college and you gotta get a job and suddenly you feel like a prisoner, waiting for those two-week checks."

The dot-com boom allowed Gobena to climb from salary to salary throughout the '90s, but the dot-com bust found him jobless in April 2001. "I thought this was a sign," he says. " 'Never go back.' "

He founded a record label called C-Side Entertainment, in hopes of introducing African artists to American eardrums. And while C-Side released albums from Admas and Ethiopian-born pop singers Wayna and Gigi, it failed to gain the momentum he had hoped for.

Gobena landed his audition with Gogol Bordello by chance, after doing session work with erstwhile Spin Doctors guitarist Eran Tabib. Tabib introduced the bassist to Gogol Bordello's sound engineer, and soon Gobena found himself in an ensemble that had been gaining critical buzz since forming in 1999, never scoring a hit song but drawing a dedicated following through incessant touring.

Last spring, Gogol Bordello headed into the studio to record a new, as yet untitled album. It will be the group's fifth disc -- and its first with acclaimed producer Rick Rubin at the helm. True to form, Rubin worked to coax the best from each musician, including Gobena.

"He was like, 'Sir, I want you to listen to this, this, this and this,' " Gobena recounts. "He had written down a list of all four Red Hot Chili Peppers records he produced! I'm like, 'Oh, this is four songs?' He said, 'No, those are four albums. Download them. Listen to them.' "

Much of Rubin's myth lies in his ability to get bands to stop thinking as individuals and start playing as one holistic organism -- something he famously helped the Red Hot Chili Peppers achieve with 1991's "Blood Sugar Sex Magik."

"I think [Rubin] figured out I was a funky bass player," Gobena says. "He wanted me to rock it like Flea and understand what space means."

After the sessions wrapped in May, Gobena returned to Washington to finish his own album. Under the name Tommy T, his solo debut, "The Prester John Sessions," was released last fall, twisting ornate Ethiopian melodies around bouncing dub bass lines.

Gobena is still finalizing a spate of solo dates across the East Coast for late January but organized a release party for the album at Washington's Station 9 the day after Thanksgiving. He was joined by his old friends in the Abyssinian Roots Collective -- a sprawling ensemble of musicians armed with horns, drums and a massinko, the traditional Ethiopian string instrument. As the band locked into the loping rhythm of album stand-out "The Call," Gobena's look of concentration eased into a grin.

The next day, he'd be leapfrogging from airport to airport -- Reagan National to JFK to Moscow to St. Petersburg. Onstage, he looked happy to be home.