Dan Brown's new novel, the eagerly awaited follow-up to his #1 international phenomenon, The Da Vinci Code, which was the bestselling hardcover adult novel of all time with 81 million copies in print worldwide, will be published in the U.S. and Canada by Doubleday on September 15, 2009.

The Lost Symbol will have a first printing of 5 million copies, and it will once again feature Dan Brown's unforgettable protagonist, Robert Langdon. Brown's longtime editor, Jason Kaufman, Vice President and Executive Editor at Doubleday said, "Nothing ever is as it first appears in a Dan Brown novel. This book's narrative takes place in a twelve-hour period, and from the first page, Dan's readers will feel the thrill of discovery as they follow Robert Langdon through a masterful and unexpected new landscape. The Lost Symbol is full of surprises."

Dan Brown's popularity continues to grow. The film of The Da Vinci Code was a #1 box office smash when it was released by Columbia Pictures in May 2006 with Ron Howard directing and Tom Hanks starring as Robert Langdon. Box office receipts were $758 million. The same team will release Angels and Demons theatrically worldwide on May 15, 2009.
The making of The Lost Symbol
[youtube]http://www.youtube.com/watch?v=2A-ddfd7STQ[/youtube]

About the Author
Dan Brown is the author of numerous #1 bestselling novels, including The Da Vinci Code, which has sold more than 80 million copies worldwide, making it one of the best selling novels of all time. Named one of the World's 100 Most Influential People by Time Magazine, he has appeared in the pages of Newsweek, Forbes, People, GQ, The New Yorker, and others. His novels are published in 51 languages around the world. 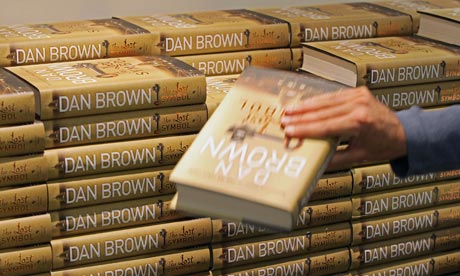 Get one while you can ... Dan Brown's new thriller The Lost Symbol Photograph: Shaun Curry/AFP/Getty Images

Dan Brown's crypto-thriller The Lost Symbol has smashed first day sales records, its publisher has announced, selling "well over" one million copies in the US, UK and Canada in its first 24 hours in the shops.

The novel, Brown's first since The Da Vinci Code, has been flying off the shelves since it was published at one minute past midnight on Tuesday. Its US publisher, Knopf Doubleday, said yesterday that it had set a one-day adult fiction sales record for global English language sales (the record was previously held by Thomas Harris for Hannibal). The publisher described demand for the book as "unprecedented"

"We are seeing historic, record-breaking sales across all types of our accounts in North America," said Knopf chairman and editor-in-chief Sonny Mehta. Knopf said that demand for the book meant it would be printing an extra 600,000 copies of the book on top of its initial North American print run of 5m copies, while in the UK, Transworld is also going back to the printers, having initially printed one million copies of the novel.

Brown's first day sales of one million copies are nonetheless dwarfed by the final Harry Potter title, Harry Potter and the Deathly Hallows, which sold 2,652,656 copies in its first 24 hours in the UK alone, according to NielsenBookScan. Children's authors tend to garner higher first day sales: last summer the final novel in Stephenie Meyer's Twilight series, Breaking Dawn, sold 1.3m copies on release in the US.

Waterstone's said that The Lost Symbol, starring symbologist Robert Langdon, had broken sales records across the chain, becoming its fastest selling hardback adult novel of all time. Readers were also keen to snap up the ebook version of the title: Waterstone's said the digital edition was its fastest selling ebook ever. "We averaged over one download of the new Dan Brown novel every minute from release," said commercial director Neil Jewsbury. "This proves that the ebook market wants to be able to buy major new titles as soon as they are released. If a publisher can make this happen for a title so anticipated and shrouded in secrecy as The Lost Symbol, then the day that every new title is available for download on the day of release is not far away."

An unabridged audio download of The Lost Symbol - which runs to over 17 hours - also became the book chain's fastest selling audio download ever. "Readers today are not governed by the restrictions of format. They want to be able to read a book in its traditional form, or on a Reader from Sony, or listen to it on their MP3 player," said Jewsbury.

He predicted that The Lost Symbol would remain at the top of the book charts for weeks to come. "There are a lot of great books out this Christmas, but we believe The Lost Symbol will remain at number one for some time – in many formats," he said.

Re: The Lost Symbol New book by Dan brown

I have read Brown's three books-The Da Vinci code, Angeles and Demons and Deception point. I was looking for Digital Fortress for a while. I found it once but i couldn't start reading. The problem is the first book I read, The Da Vinci Code, was way far interesting than the others and I couldn't enjoy the rest(especially Deception point is not a piece of work I would expect from Brown). I was totally taken away by that book (honestly, the movie was not so good, I can't even finish watching it). I hope The Lost Symbol will be at least as good as The Da Vinci Code. Thanks OC for the post. I would love to discuss the book here once I finish reading.